GOSSIPONTHIS.COM Viral Videos ‘Officer Karen’ Has Emotional Breakdown Over Having to Wait for Egg McMuffin:... 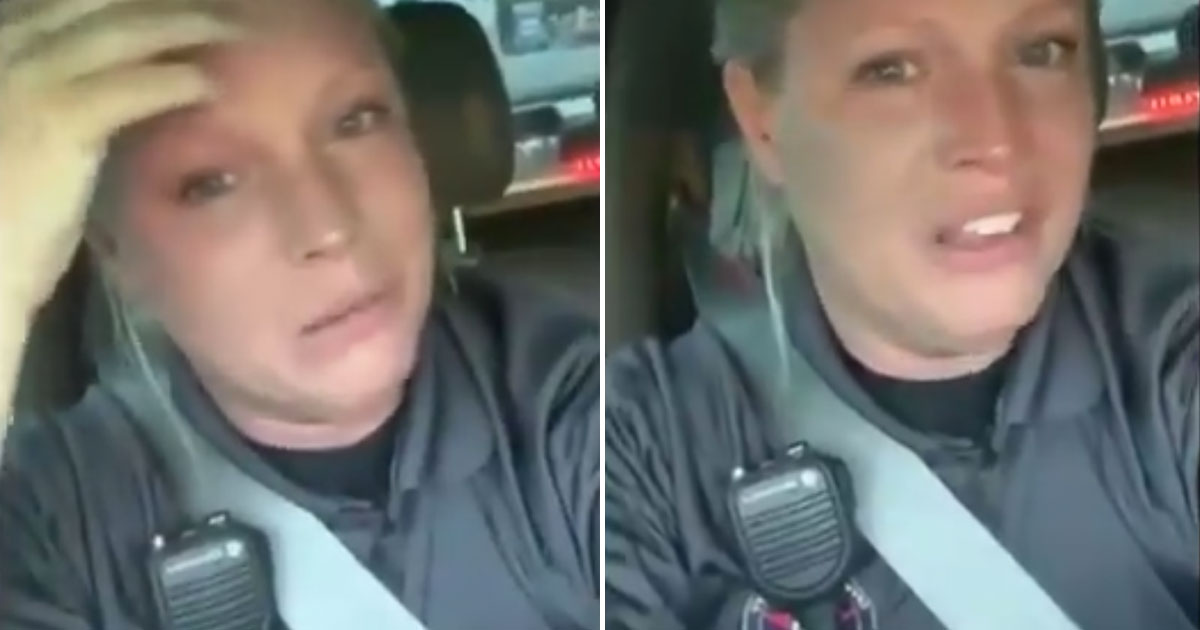 A White female cop has gone viral on social media after a video showed her having a full-on emotional breakdown after a recent visit to a McDonald’s because she had to wait for an Egg McMuffin that she ended up no longer wanted.

Dubbed “Officer Karen” and “Stacy McMuffin” by Twitter users, the policewoman—whose real name is said to be Stacey—breaks down into tears because she was afraid to eat her breakfast sandwich because it took too long to make and she couldn’t see it being made.

In other words, she was worried that someone had put something in her food because she’s a cop.

I don’t know what’s going on with people nowadays, but please, just give us a break. Please just give us a break. I don’t know how much more I can take. I have been in this for 15 years and I have never ever had such anxiety about waiting for McDonald’s drive-thru food. So please just have a heart and if you see an officer just tell them ‘Thank you.’ Because I don’t hear ‘Thank you’ enough anymore.”

Watch the clip for yourself below:

Stacey who has been a cop for 15 yrs went to @McDonalds She paid for it in advance and this is how she gets treated for being a cop?? Come on America. We are better than this. pic.twitter.com/IcudsNfVLY

This comes after three NYPD cops claimed they ingested bleach because they believed their milkshakes at a Manhattan Shake Shack location had been poisoned. It was later determined that “no criminality” was done by any Shake Shack employees.

Still … following the recent tragic deaths of Rayshard Brooks at the hands of cops in Atlanta, George Floyd at the hands of Minneapolis cops, and of course, Breonna Taylor at the hands of Louisville police, social media has very little sympathy for a police officer crying over a damn breakfast sandwich.

If a one minute delay on your McMuffin causes you to break down crying because you assume it’s being poisoned… you shouldn’t have a gun.

this person…..having a mental breakdown over a mcmuffin… is allowed to carry a pistol everyday and use it whenever they deem it necessary https://t.co/A4ty2YJZzn

Officer Karen calling for backup after having a mental breakdown for not receiving her breakfast meal ?? pic.twitter.com/WnyJmGIHoX

I can't imagine being the woman working for minimum wage at McDonalds who is now seeing a video go viral of an unstable and armed police officer–for whom she brought out a cup of coffee–accuse her of suspicion of tampering with a McMuffin. I would be terrified.

I am speechless. Black people are worried about getting killed in their sleep and cops are having nervous breakdowns about hash browns. Police officers need to be able to handle high pressure, life or death situations, and Stacey has gone viral because her McMuffin was late https://t.co/sTVIINM0oS

her job is being a police officer, anyone having a breakdown like that over a McMuffin doesn’t need to be carrying a firearm? Let alone being put in any actual stressful situations. if these officers emotions are so high they should be on leave. https://t.co/PiitkXti9E

McMuffin is trending because this woman had a full meltdown about having to wait for her order.

Officers collapsing into self-pity because they’re mildly inconvenienced… while a whole lot of Americans fear for their lives when they see them coming.

While Officer Karen is trending, a reminder a Martin Gugino is still hospitalized with a fractured skull and is yet unable to walk. pic.twitter.com/tMosJzZFoq

The weaponization of white womens tears is amazing. Like we don’t wait an extra 10 minutes for Spicy every time we go to Popeyes even BEFORE the pandemic or the rebellion. Girl GTF. Use the wait time to teach your partners to be less racist. https://t.co/TyL1zZDEKy

Officer Karen's story about waiting for her McDonalds Egg McMuffin is way worse than the guy who was killed for sleeping on line at the Wendy's drive-thru. Yeah, it isn't. Get a grip lady.

The cops who killed Breonna Taylor have still not yet been charged. Meanwhile, Officer Karen is having a meltdown over a McMuffin.

You see "Officer Karen" trending and you’re like, “What could this be about?” Then you see the tape and your heart just breaks into a million pieces.
Imagine never knowing if your McMuffin is going to come home. Imagine living with that fear

Get a grip, Stacey!

Black people are out here DYING after interacting with your comrades, and you having to wait for a McMuffin that you wrongly assume has now been poisoned is what’s sending you over the edge? Good grief.