GOSSIPONTHIS.COM Sports Sha’Carri Richardson Roasted on the Internet After Coming in Last Place in... 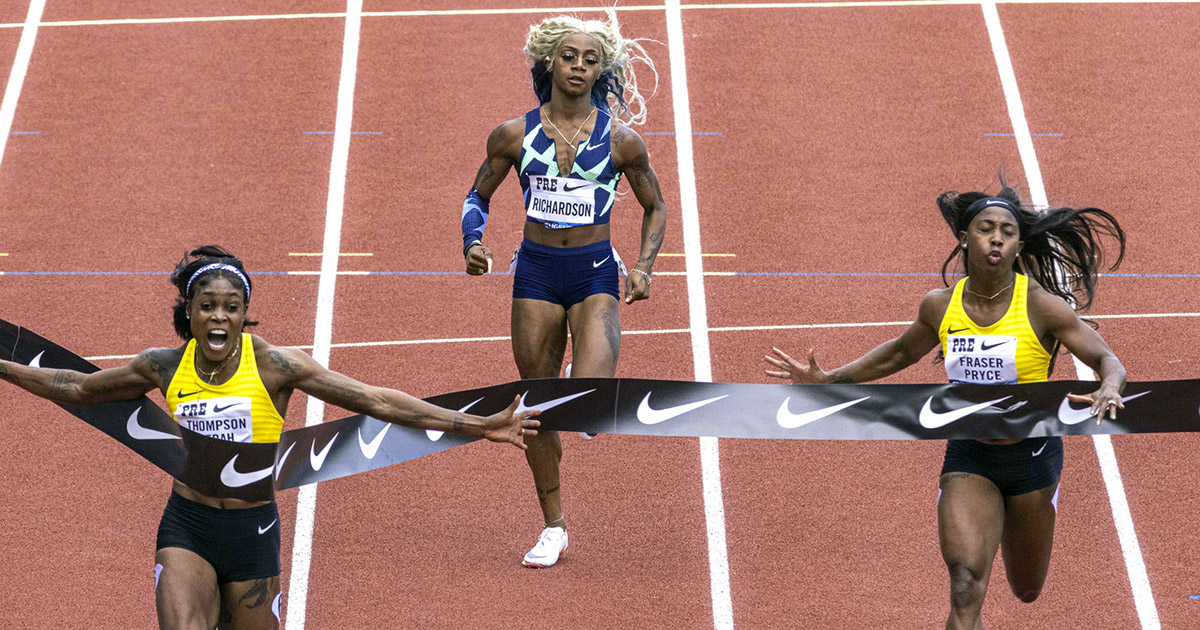 Sha’Carri Richardson is once again the talk of the Internet, but not in a good way.

Back in July, the track star made headlines after she was disqualified from the 2021 Tokyo Olympics for failing a drug test. Richardson was banned due to marijuana being detected in her system. Many found the banning unfair and unjust due to the drug not being a performance-enhancing substance.

Despite the devastating news, Sha’Carri took responsibility for her actions and also revealed that during the time she used the drug to cope with the death of her mother.

Along with the general public, celebrities including Diddy, Gabrielle Union, Halle Berry, Seth Rogen, Cardi B, and many more spoke out in support of Sha’Carri and even voiced that the Olympic’s rules against marijuana were outdated and needed to be changed to represent the current state of America.

Rapper Kanye showed his support of Sha’Carri by enlisting her for a Beats by Dre ad promoting his upcoming album Donda. Nike also released a statement showing their support to Sha’carri and stating they would keep their sponsorship with her.

Though she was not allowed to participate in the 2021 Olympics, there is no doubt Sha’Carri has felt all of the love and support and for sure has been given her flowers. On July 30th she tweeted asking her fans if they missed her yet.

The tweet received mixed results from followers, with some taking Sha’Carri’s tweet as being arrogant and not humble. Some also took it as she was throwing shade at some of the other participants in the Olympics.

Sha’Carri fired back at all those who had something to say and advised them to unfollow her page if they had a problem with her tweets.

If you don’t like what I tweet you can definitely unfollow me. If you choose to think of all my tweets as petty and shady then you should unfollow me showing your own character but don’t use my tweets to do it ???have a day. https://t.co/3BBgy9mkjA

Despite the backlash, it was later announced that Sha’Carri would be given her chance to return to the track on August 21st at the Nike Prefontaine Classic at the University of Oregon. This would be her first race since being disqualified from the Olympics.

Days before the race, Sha’Carri posted a video on Instagram with Nicki Minaj playing in the background and making it clear that she wasn’t coming to play no games.

She captioned the video: “August 21 and I’m not playing nice.”

However, Sha’Carri’s return to the field didn’t go nearly as she or fans expected.

On Saturday (Aug. 21) the track star came in last place in the 100-meter dash race against 8 other competitors, including three of the Jamaican sprinters who won gold, silver and bronze during the Olympics. Footage showed Sha’Carri trailing behind the other sprinters throughout the entire race.

Following the race, Sha’Carri spoke to NBC and stated that she wasn’t upset about falling short in the race and that she is far from done.

Sha'carri Richardson after the race: “This is one race. I’m not done. Count me out if you want to … Talk all the shit you want to! You know what I can do!" pic.twitter.com/xlmJzpDd2D

“Having a month off. Dealing with all I was dealing with. I’m not upset at myself at all,” she said during the post-race interview.

“This is one race. I’m not done. You know what I’m capable of. Count me out if you want to. Talk all the sh*t that you want cause I’m here to stay.

“I’m the sixth fastest woman in this game ever. And can’t nobody ever take that away from me. Congratulations to the winners, but they not done seeing me yet.”

Of course, Twitter has been roasting Sha’Carri to shreds about getting smoked in the race and for being overly confident and not getting the job done.

#ShaCarri i though you said it was game time ?? pic.twitter.com/7ajgvH4Lyw

After all those indirect tweets I at least thought Sha’Carri would get 4th? #Jamaica #ShaCarri Me looking at the tv like: pic.twitter.com/LP5KsLAvTR

Hopefully she will get them next time. But right now, it looks like it’s time for Sha’carri to have a nice slice of humble pie.