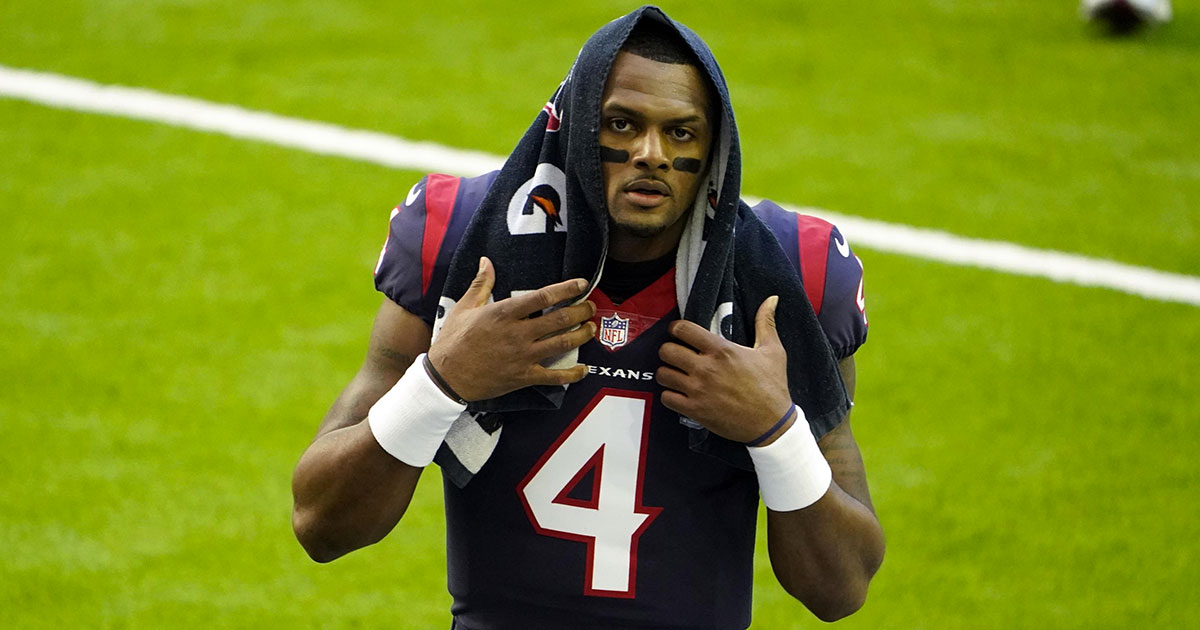 Deshaun Watson is reportedly facing not just one, not just two, but THREE separate civil lawsuits from women accusing the Houston Texans quarterback of sexually assaulting them during massages.

After announcing the first lawsuit on Tuesday, Houston attorney Tony Buzbee posted on social media about a second suit on Wednesday and later that evening, Buzbee announced in a post that a third lawsuit—this one “the most egregious” to date—had been filed as well.

The second lawsuit says, “Watson’s behavior is part of a disturbing pattern of preying on vulnerable women.”

Buzbee declined to go into details about the third lawsuit, but addressed any perceptions that the suits had anything to do with gaining notoriety or financial gain.

“I’ve been doing this a long time. I don’t need ‘fame’…,” Buzbee wrote. “I’m not pursuing these cases for the money, and every woman who has filed thus far has only plead the minimum amount to invoke the court’s jurisdiction ($500). This isn’t about the money!!”

In the second filing, Watson allegedly booked the massage through Instagram, and flew the masseuse from Atlanta to Houston in August 2020. Prior to arrival, they discussed what he was looking for, and allegedly asked her to specifically focus on his “glutes and his groin area and asked if she was comfortable with working on those areas.”

The lawsuit states that she arrived at the hotel where the massage was to take place, but when she went to the room, the Texans quarterback was nude and allegedly refused to cover up with a towel despite multiple requests, stating that he “gets hot too easily.”

The filing says that Watson allegedly asked the woman to focus on the “inner part of his anus” and towards his “genitals.”

When the Texans quarterback flipped onto his back, the woman handed him a towel to cover up, which he refused. She became uncomfortable shortly after, and ended the massage, asking to leave.

“Watson grabbed her hand and started to rub her arm, pulling her towards him, saying ‘It is okay, it is okay.’ Plaintiff pulled away,” according to the lawsuit.

The filing also states that the masseuse only received half of her payment, but was “so disturbed” that she didn’t ask for the second half.

The first lawsuit was filed on Tuesday and appeared on the Harris County district clerk’s website Wednesday morning. The incident took place in March 2020, and the lawsuit says it was “apparent that Watson wanted the massage for only one reason—sex.”

“As she was trying to figure out how to extricate herself from the situation, Watson continued to aggressively attempt to steer the conversation to how Plaintiff was not rubbing him the way he wanted. Several times he specifically kept trying to direct her to his penis,” the lawsuit says. “At one point, he purposely exposed the tip of his penis from under the towel.”

The lawsuit claims the quarterback was “fully erect,” and he “moved his body so he could expose himself more.” It also alleges Watson “purposefully touched the Plaintiff’s hand” with the tip of his penis.

The Plaintiff, listed as “Jane Doe” in the case, quickly ended the session, and according to the lawsuit, Watson told her, “I know you have a career and reputation, and I know you would hate for someone to mess with yours, just like I don’t want anyone messing with mine.”

Buzbee, who represents the Plaintiffs in both cases, said on social media that four cases against Watson, but only two have been filed so far.

ESPN reported that the Texans issued a statement earlier on Wednesday.

“We became aware of a civil lawsuit involving Deshaun Watson through a social media post last night,” the team’s statement said. “This is the first time we heard of the matter, and we hope to learn more soon. We take accusations of this nature that involve anyone within the Houston Texans organization seriously. We will await further information before making any additional statements on this incident.”

Watson responded to the claims from Buzbee on social media Tuesday night, denying the allegations. Watson said Tuesday that he had not seen the complaint yet.

We’re not saying we don’t believe these women, but the timing of these allegations is VERY interesting, to say the least…