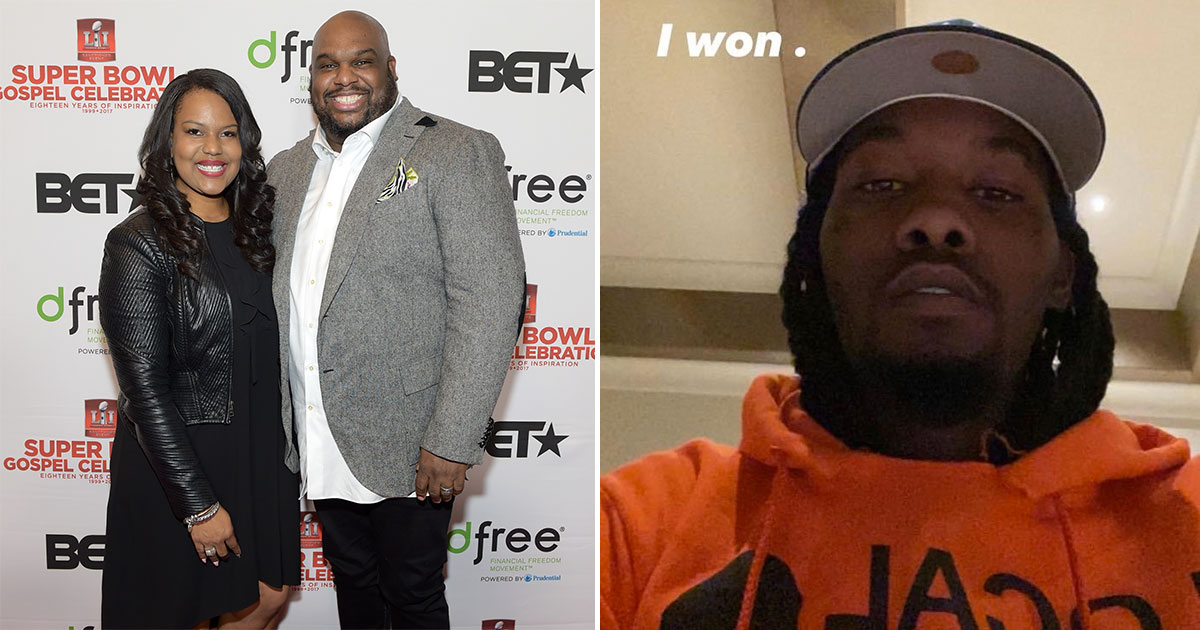 Pastor John Gray has finally issued a public apology to his wife Aventer Gray following his most recent cheating scandal … and Twitter users are pointing out the similarities between him and Migos rapper Offset (who stays cheating on his wife Cardi B).

Pastor Gray took to Instagram Friday to “honor” his wife of over 10 years, and in his post, he denies sleeping with another woman, but does admit to being “emotionally unfaithful.”

“A few months ago I sat down from leading at Relentless. My life wasn’t in order. Church isn’t first. My wife is. This is my wife. She is from God. She is a life giver. She is a kingdom builder. Her name is Aventer,” Gray captioned his lengthy IG post.

Gray—who is the pastor of Relentless Church in Greenville, South Carolina—has been accused of cheating on his wife multiple times, with the first accusations dating back to 2018. He even bought her a $200K Lamborghini to put a stop to an impending divorce.

Speaking in an interview on The Real in March 2019, Pastor Gray said his affair was an emotional one, and not a physical one. He claimed that when he and his wife were having problems within their marriage, he was confiding in someone other than a counselor or pastoral leader, which he admitted was totally wrong.

However, despite Gray’s insistence that he didn’t physically cheat on his wife (i.e. have sex with another woman), speculation remains that his affair was, indeed, more than just emotional.

“I never knew what consistent discipline, planning, leadership, manhood, or personal holiness in action from a man’s standpoint looked like. Living a shadow life, God was unwilling to let me die assuming I was whole. I failed to uphold the holy standard of God in my marriage,” Gray shared in his IG post.

“And I’m sorry. Although you are the only woman I’ve ever slept with, emotional unfaithfulness is just as wrong. Sin is sin. People want to minimize one sin over another, when it all can get you sent to hell…

“My wife deserves better. The pain I caused her is immeasurable. Seeing her name in blogs because of things I did broke my soul. So since I was the cause of public embarrassment, let me be JUST AS LOUD ABOUT PUBLIC HONOR.”

Pastor Gray’s public apology to his wife comes just two months after video footage was released of him allegedly on a phone call with his side piece Mary.

The clip shows Gray trashing his wife Aventer for not cooking and saying that their son (who was also shown in the clip sitting in the backseat of the car and agreed that his mother doesn’t cook) has to eat frozen pizzas instead.

Another clip appeared to show Pastor Gray telling Mary to grab her “favorite two-piece” swimsuit and her mask for a surprise trip to Cabo while also showing off video of a private jet. “You got an hour to get ready,” he told her in the clip.

Meanwhile, Twitter isn’t here for Pastor Gray’s apology and they’re having a field day over the news, with some people calling him the Offset of preachers and others wondering how the hell he has the time to be a full-time pastor and a part-time cheater.

“John Gray is just Offset in a Pulpit,” wrote one Twitter.

“When does John Gray actually have time to be a pastor?! He’s always announcing an affair,” another said.

Peep the hilarious responses below:

When does John Gray actually have time to be a pastor?! He's always announcing an affair. pic.twitter.com/KujT2c7brh

John Gray is just OffSet in a Pulpit. https://t.co/sM5A6Ik1Kg

John Gray : i cheated on my wife again y’all

Wait John Gray cheated again?? I thought y’all were bringing up the one from before?? That man will lift his stomach up for anybody!

john gray gotta be trying to outdo offset with public embarrassment and the wife steadily coming back.

Somebody said Pastor John Gray is just Offset in a pulpit and I am wheezing!!! ???

Offset just admits to it and keeps it pushing. John Gray won't just accept that he's a TomCat

Who in HELL keeps sleeping with John Gray?! And WHY?!?! pic.twitter.com/yPwhZTtY7J

literally nobody:
not a soul:
not a creature or a mouse:
john gray: the devil has been busy once again https://t.co/RFINShzQ3z

The devil be minding his business and here come John gray ????? https://t.co/ZEcMC2roxf