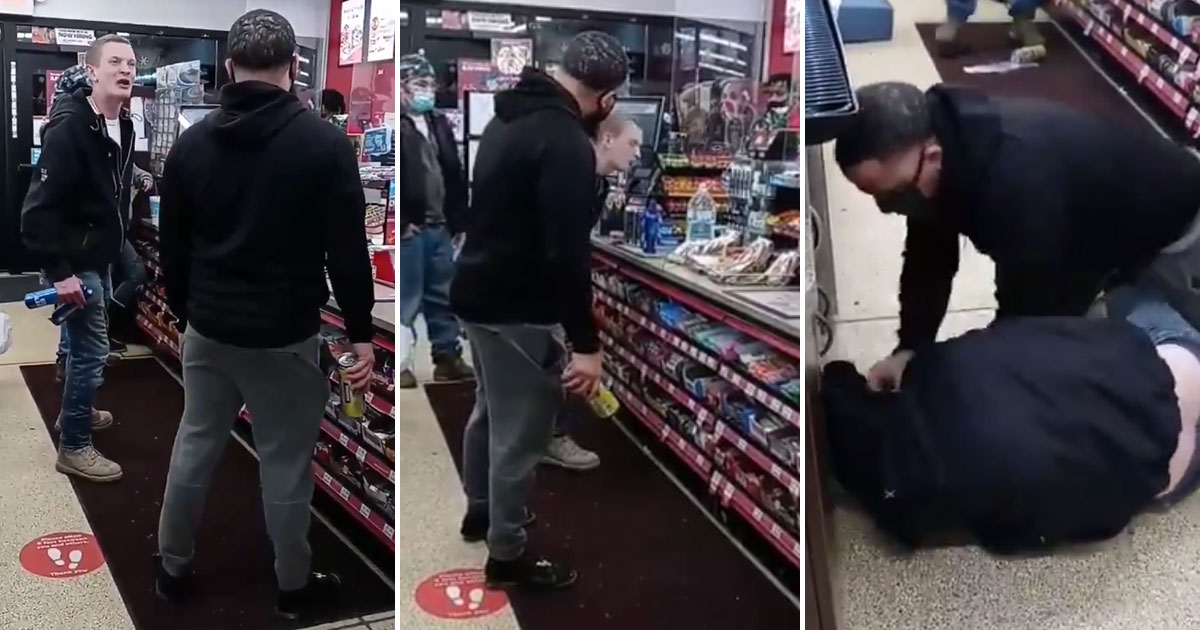 A video has gone viral showing the moment a Black man used a can of Twisted Tea to slap the life out of a white man who thought it was OK for him to say the n-word over and over again.

Apparently, the unidentified white man—who appeared to be EXTREMELY inebriated—had said the n-word before the video started rolling and was being confronted by the Black man who looked to be in the process of purchasing a number of items, including a can of Twisted Tea—an alcoholic beverage.

“I’ma say n***a all day, every day. Are you kidding me?! … You a clown n***a! On God, nigga, you a clown, n***a!” the drunk white man said to the Black man, who then proceeded to grab a Twisted Tea and pondered over whether or not to use it.

“What? You gonna smack me with that?” the drunk (and apparently stupid as well) white man asked. “Smack me with it. Smack me! Smack me, n***a!”

I guess you can say the Black guy literally opened up a can of whoop-ass on the white guy, amirite?

After the footage went viral, Twitter did what it does best and memed the hell out of the situation, making “Twisted Tea” become a worldwide trending topic in the process.

What is even going on right now with this Twisted Tea lmao ? pic.twitter.com/UmawgmyqVP

You know I keep that muhfuckin Twisted Tea with the extendo on me. pic.twitter.com/6SE0qZzJIa

This is by far my favorite Twisted Tea meme thus far ? pic.twitter.com/wXlA8GmiLz

When the cop ask me if I have any weapons in my car #TwistedTea pic.twitter.com/BjEzh04yuu

me in the back of the function knowing I got a twisted tea on me pic.twitter.com/vjM45Odo43

Me leaving the function when I see someone come in with a twisted tea unprovoked pic.twitter.com/lxJgjoEbpq

The Twisted Tea tho… which one of you niggas did this??? ???? pic.twitter.com/XsK5MamTuB

pls enjoy my contribution to the twisted tea memes pic.twitter.com/O8wYkg3lBg

When your friend brings twisted tea to the party #TwistedTea pic.twitter.com/YKWAE4tL7b

BRB going to be laughing at Twisted Tea memes for the rest of the night. pic.twitter.com/X505Tfqha8