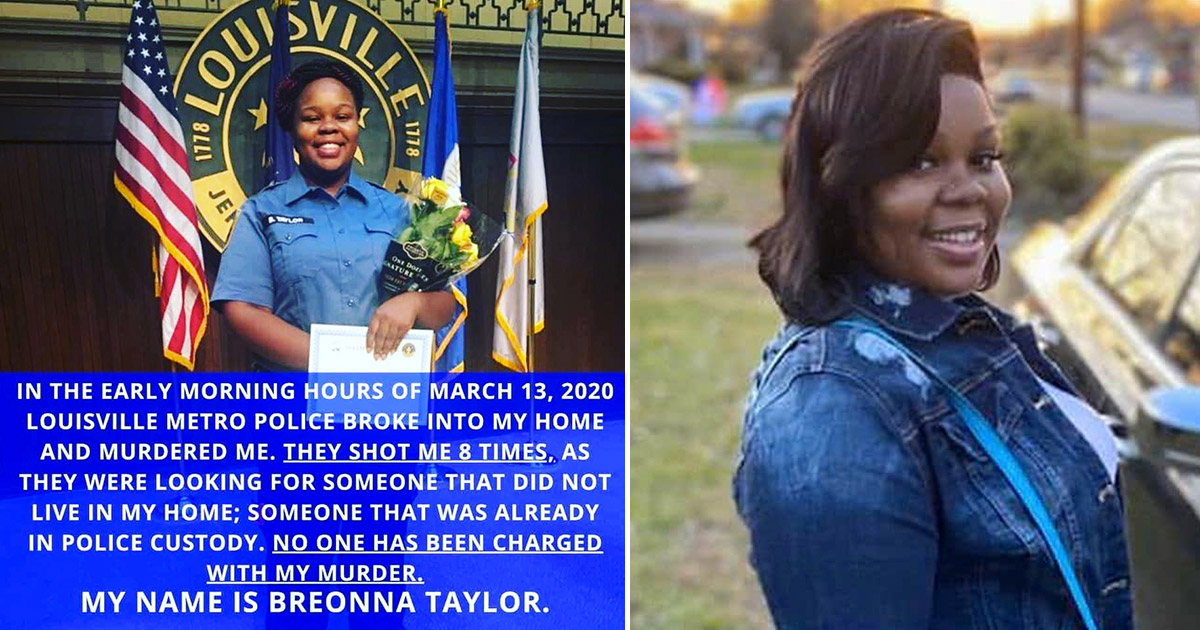 The family of a young aspiring nurse working as an EMT who was shot and killed by police in her own home in Louisville, Kentucky back in March has filed a lawsuit against the city’s police department, claiming she did “nothing to deserve to die at their hands.”

26-year-old Breonna Taylor, who’d been working on the frontlines of the coronavirus pandemic, was fatally shot around 1 a.m. on March 13th by Louisville Metro Police Department officers who came into her apartment to execute a drug warrant.

According to the lawsuit, the officers burst into the home without knocking and “blindly fired” into it, spraying at least 22 bullets all over Taylor’s apartment and neighboring units “with a total disregard for the value of human life.”

Taylor was struck eight times in the hail of police gunfire.

Her boyfriend, Kenneth Walker, a licensed gun owner, thinking they were being robbed, fired shots at the police when they rushed in, hitting LMPD Sgt. John Mattingly in the leg, according to an attorney for the 27-year-old.

Attorneys said it turned out the police had the wrong address, and the suspect they were looking for had already been arrested at his home just moments before the raid at Taylor’s apartment. On top of that, nothing illegal was found inside Taylor’s home.

The suit from Taylor’s family names Sgt. Mattingly and officers Brett Hankinson and Myles Cosgrove as defendants. The officers are currently on administrative reassignment

Due to the coronavirus pandemic, Taylor’s senseless death received little to no media attention outside of Louisville, however, details are now beginning to surface because of other news regarding Black Americans and police violence.

Walker was initially arrested and charged with attempted murder of a police officer and first-degree assault, but has since been released from jail and placed on home incarceration. He pleaded not guilty to the charges.

Police initially called Taylor a “suspect,” but haven’t talked much about the case since, saying that it’s currently under investigation, however, LMPD Chief Steve Conrad and the police union both criticized a judge for releasing Walker.

“I certainly understand the need to make sure we are releasing those people who don’t pose a risk to our community from the jail, especially as we face the outbreak of COVID-19,” Chief Conrad said in an e-mail.

“However, it’s hard for me to see how a man accused of shooting a police officer falls into that low-risk category and I am very frustrated by Mr. Walker’s release to home incarceration.”

River City FOP president Ryan Nichols wrote in a Facebook post Friday, saying of Walker: “Not only is he a threat to the men and women of law enforcement, but he also poses a significant danger to the community we protect! Home incarceration was not designed for the most violent offenders! I call on the public to condemn the actions of Judge Olu Stevens.”

Given the number of shots that were fired by LMPD officers, Walker’s defense attorney said “it was incredible that Ms. Taylor was the only one killed” and questioned why the officers have not been charged in her death.

“Had Breonna Taylor been killed by anyone except police, the person or persons responsible for her death would have been charged with a homicide,” Eggert said in a court document. He also said his client, Walker, is a “victim of police misconduct.”

Eggert said police did NOT announce themselves as they burst through Taylor’s apartment door while the couple was sleeping.

Eggert acknowledged that Walker fired a single shot, which hit Sgt. Mattingly in the leg, but claimed that Walker had no idea he was opening fire on police, who then returned fire.

Eggert said that Walker, had he known the police were outside, would have let them in.

Police, however, tell a different story and say that they knocked on the door repeatedly and announced their presence, but were eventually forced to bust through a door, where they were met with gunfire.

A next-door neighbor of Taylor’s said she awoke to the sound of gunfire and heard Walker yelling for help, but she said she never heard the police announce themselves, according to an affidavit filed in court records.

Police said there’s no body camera footage of the shooting because the officers involved were members of the department’s Criminal Interdiction division, and they don’t wear body cameras.

The lawsuit from Taylor’s family against the LMPD was filed late last month by local attorney Sam Aguiar.

Aguiar said in an interview Monday that he hoped the litigation would spark a federal investigation of the incident and force LMPD officials, who have been less than forthcoming regarding the case, to provide more answers.

“I think that when the city and the mayor’s office and the administration in the police department go out and flaunt transparency, it is incredibly hypocritical,” Aguiar said.

“Whether it’s the mayor or Chief Conrad or somebody, an effort needs to be made to bring in the (Department of Justice) into situations like this to come in with an impartial eye and investigate these officers.”

According to the suit: “The officers failed to use any sound reasonable judgment whatsoever when firing more than 25 blind shots into multiple homes and causing the wrongful death of Breonna.”

“We stand with the family of this young woman in demanding answers from the Louisville Police Department,” Crump said.

“Despite the tragic circumstances surrounding her death, the Department has not provided any answers regarding the facts and circumstances of how this tragedy occurred, nor have they taken responsibility for her senseless killing.”

Breonna Taylor’s mother, Tamika Palmer, spoke to the Washington Post about her daughter’s shooting death at the hands of LMPD officers.

Palmer added: “She was an essential worker. She had to go to work. She didn’t have a problem with that. … To not be able to sleep in her own bed without someone busting down her door and taking her life. … I was just like, ‘Make sure you wash your hands!'”