GOSSIPONTHIS.COM News FAKE NEWS ALERT: No, a Man Did NOT Accidentally Burn His House... 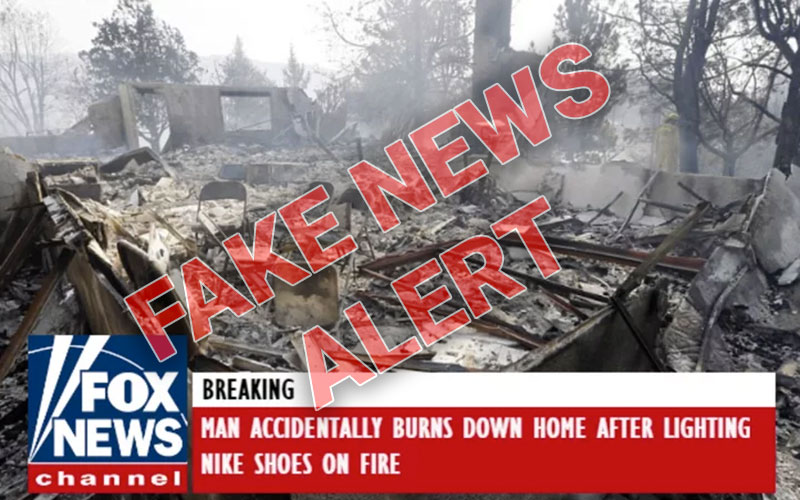 A story about a man who accidentally burned his house down after setting his Nike shoes on fire in protest over the company’s ties with Colin Kaepernick is 100% fake news, according to Snopes.

BREAKING: Nike had been paying Colin Kaepernick all along, waiting for the right moment. That moment is now, as he becomes the face of the company’s 30th anniversary of the “Just Do It” campaign. pic.twitter.com/uccpDStbq5

Disgruntled consumers then took to social media to show that they would no longer be supporting the brand by destroying their Nike apparel, mostly by fire

.@Nike Due to your support of C.K. in your coming adds, I as an American can no longer support your company. #boycottNike #IStandForOurFlag pic.twitter.com/5JxSMD8SSO

So this created a perfect storm for someone to come up with some fake news. One person created a viral Facebook post that made it look like he suffered severe foot burns by setting his Nike shoes on fire while he was wearing them.

Then the faux news website Huzlers joined in on the “let’s make sh** up” fun by posting an article saying that a Florida man had accidentally burned his house by down while trying to burn a pair of Nike sneakers over the company’s public support of Colin Kaepernick. The article even had a picture of a white man with a tattoo on his forehead that reads “racist” to make the story seem more plausible. A Florida man has been arrested after he reportedly accidentally burned his home down by attempting to burn a pair of Nike sneakers in protest of their latest Colom Kaepernick Ad.

According to authorities, Jason Helms, 26, placed a pair of Nike sneakers in his garage and soaked them in Kerosene before lighting them on fire. The fire ended up spreading to the the garage walls and ceiling before spreading to his actual home. All in protest against Nike, who recently made an Ad featuring controversial NFL star Colin Kaepernick and reading: “Believe in something, even if it means sacrificing everything… Just do it”. “Don’t burn your Nike gear” says police officer Don Greestien, “just send them over to me”.

Jason Helms also has a history of race related crimes in the past and is now being charged with Arson and reckless endangerment and can face up to a few years in prison.

That same article was also published on other fake news sites imitating the appearance and domains of real news organizations such as the Fox News Channel and USA Today, and with the location changed from Florida to Rochester, NY and Bartlesville, OK.

The bogus story went viral on Facebook and has been shared thousands of times. Facebook users were quick to joke about swift “karma” or the alleged victim’s intelligence, but there’s one problem: THIS NEVER HAPPENED.