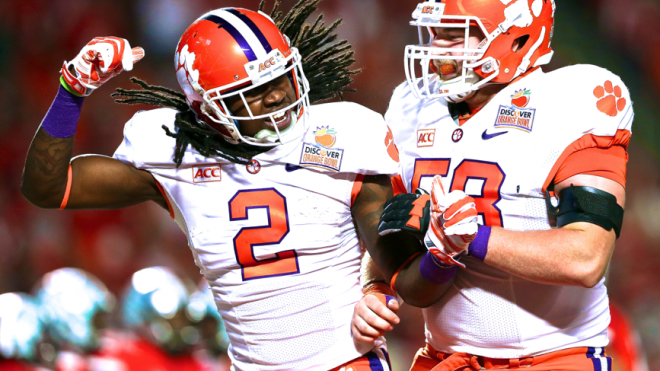 Remember that 70-33 blowout loss Clemson suffered at the hands of West Virginia two years ago? We’re sure you do. All college sports fans do.

Well, now that’s all a distant memory, as of Friday (Jan. 3) after the Tigters won the 2014 Orange Bowl — their first BCS bowl victory — against the Ohio State Buckeyes at Sun Life Stadium in Miami, Florida.

The final score was 40-35 and Clemson’s win comes 32 years after the Tigers’ last victory in the game — the 1981 Orange Bowl that gave Clemson a national title, USA Today Sports reports.

“Bad things happen in life,” Clemson coach Dabo Swinney said. “Two years ago, we got our butts kicked on this field, but it’s how you respond that matters.”

Clemson responded in a big way, posting a bowl victory against a Top 10 opponent for the second consecutive year to cap the first back-to-back 11-win seasons in school history.

The Tigers (11-2), who entered the game ranked No. 11 in the USA TODAY Coaches Poll, also positioned themselves for a second consecutive Top 10 final ranking.

“I can’t think of a better way to give back to the school than a victory in this game,” said Boyd, who also rushed for a career-high 127 yards and another touchdown. “It was a very impressive victory for this team, this university.”

It was impressive, particularly considering where Ohio State (12-2) had been less than one month ago. The Buckeyes were ranked No. 2 and poised for a national title game appearance before stumbling against Michigan State in the Big Ten championship game on Dec. 8.

Clemson unleashed a potent offensive attack against the Buckeyes, but it took every yard and every point to subdue the Buckeyes.

The Tigers amassed 576 total yards, including 198 rushing — the most allowed this season by a Buckeyes defense that ranked No. 3 nationally against the run. Clemson averaged 7.6 yards per play and went 7-for-13 on third down conversions.

“It has been a long journey to get back (to the Orange Bowl), but we are Orange Bowl champs again,” Swinney said. “And we are the first team from the state of South Carolina to win a BCS game.”

Wide receiver Martavis Bryant also stood out in what could possibly be his final game, scoring himself 28 yards and two touchdowns.

Oh, and this happened:

And so did this: