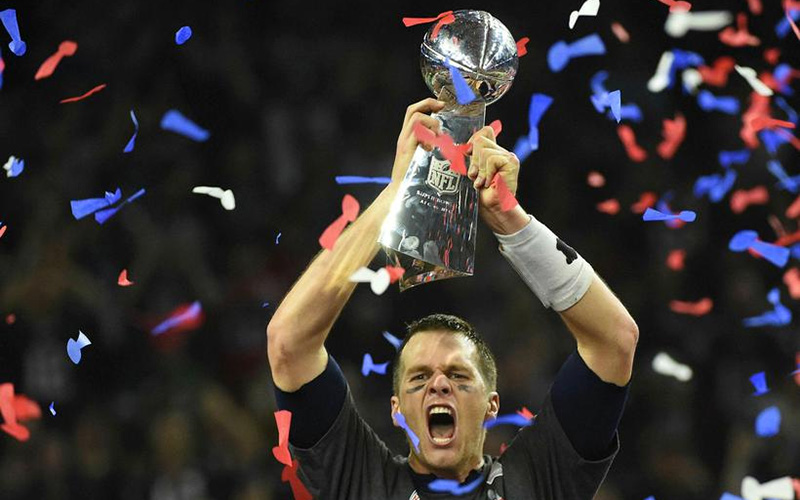 Say what you will about Tom Brady and the Patriots, but no one can deny how amazing their comeback was in last night’s Super Bowl matchup against the Atlanta Falcons. Down 28-3 in the third quarter, their 25 point comeback destroyed the previous record of overcoming a 10 point deficit. But that wasn’t enough to convince many people online to accept the results.

Just like the trend #NotMyPresident took over the internet after Trump’s victory in November, today #NotMySuperBowlChamps is one of the top trending hashtags on Twitter right now. And the similarities between the two situations are strong.

Like Trump, people either absolutely LOVE them, or they unapologetically HATE them. Both overcame seemingly insurmountable odds to pull out the victory. Not to mention that Trump supports the Patriots and is a well-known friend of both their owner, Robert Kraft, as well as the Super Bowl MVP Tom Brady.

And both are facing a backlash of hate following their victories.

Lady Gaga had more yards through the air than Tom Brady. #NotMySuperBowlChamps

??? Maybe next time you can get Donna Brazile to steal the playbook.. #NotMySuperBowlChamps pic.twitter.com/q88EY9NE6N

I still don't accept the results of this super bowl. I'm gonna riot and smash the windows of my local Starbucks. #NotMySuperbowlChamps

Looks like @HuffingtonPost didn't get any better at predictions #NotMySuperBowlChamps pic.twitter.com/6eQoAaAIcm

The New England Patriots (the top 1%) have won too many Super Bowls. We need to break them up and let everyone win. #NotMySuperBowlChamps

While the trending hashtag was obviously in jest (no one is actually protesting the results of the game) and resulted in some pretty funny posts, there were also a large number that seemed to take it way too seriously and used it to make hate-filled political statements as well.

To all you but hurt Liberals who started this ridiculous tag. ??See Pic Below??#NotMySuperBowlChamps #SuperBowl #Patriots #Falcons pic.twitter.com/ThPC5rpj2y

Last night was election night all over again and boy was it sweet. #NotMySuperBowlChamps #BoycottBudwiser

Um, maybe learn to understand a joke, guys? And if there is anyone out there who truly believes #NotMySuperBowlChamps, at least you only have to wait a year for that to change. The presidency? Not so lucky.