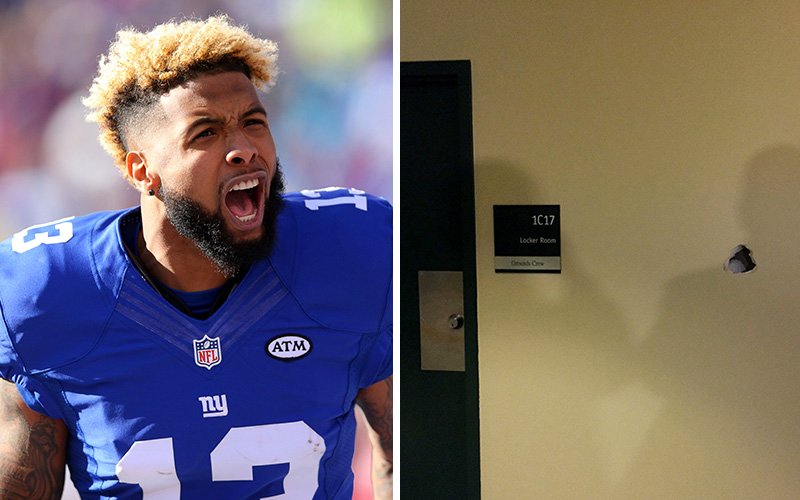 Beckham and his team’s dreams of going to the Super Bowl in February were deaded after the Packers ate them for Sunday dinner. The Wide Receiver had trouble holding onto the ball in the first quarter. One of those dropped passes happened in the endzone, which cost the Giants a touchdown, the first time he’s ever done so in his career.

According to reports, OBJ, who is popular on social media right now for surprising Lyft riders did not take the loss well and, once again, let his anger get the best of him.

The 24-year-old football star reportedly threw a temper tantrum, and was seen banging his head against a locker room door at Lambeau Field in Wisconsin. He’s believed to have punched a pretty large hole in the wall near the door, and had tad to be calmed down by stadium security.

There’s no video footage yet, but it probably looked like this (but apparently way worse):

A distraught @OBJ_3 after the Giants loss in Philly pic.twitter.com/r0P8CMGky5

Despite the lack of video footage for Odell’s latest meltdown, we do have a couple of photos of the aftermath from sports reporters for ESPN and the New York Daily News: Odell Beckham was banging head against locker room door, per Sal Pal. Also believed to have punched this hole in pic.twitter.com/dOpRJyremD

Prior to the alleged head banging and wall punching, Beckham didn’t show any signs of anger during the postgame press conference and seemed to take the loss in stride.

“These are the learning experiences, as tough as they are,” Beckham said (via ESPN). “This is what you stand on and grow from. It sucks. There is no way to put it. It sucks. It is a horrible feeling.”

He added, “I’m sure it’s going to be a long offseason. At the end of the day, you just have to take it and you have to grow. You have to learn from it and find ways not to have this feeling again.”

Giants QB Eli Manning took up for his teammate, telling reporters that Odell is just “disappointed” because he’s “an emotional guy.”

“I saw him with his head down and disappointed,” Manning said. “There are a lot of guys that will shed a tear or two. When you lose a playoff game — and for a lot of guys it’s their first time in the playoffs — to kind of have the season abruptly end like that is a shock. Everyone handles it differently.”

Some people are blaming Beckham’s poor performance tonight on the cold weather and winter storm Helena bringing temperatures to near-single digits, but Twitter has its own theory:

the only thing Odell Beckham @OBJ_3 caught this week was Bieber fever?

Giants should have known they were screwed when Odell was hanging out with Bieber this week.

Odell beckham jr. is a virus to the Giants. Spend less time hanging with Bieber and more time practicing catching balls from Eli