GOSSIPONTHIS.COM Sports Riley Curry Is Not Here For Your NBA Championship Celebration 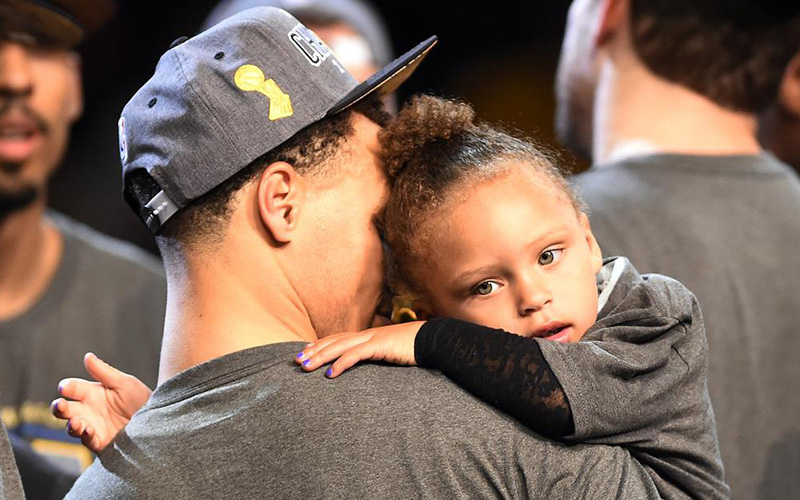 Riley Curry was so not in the mood to celebrate following the Golden State Warriors‘ title-clinching win over the Cleveland Cavaliers.

Ever since Riley made her presence known, every single time the Warriors has won a Playoffs or Finals game, fans have looked to Stephen Curry‘s adorable 2-year-old daughter to see how she’ll react, and Game 6 of the Finals was no different. After Golden State defeated Cleveland 105 to 97, bringing the series’ final tally to 4-2, Steph Curry immediately rushed over to his family and tried to give Riley a kiss, but she was having none of it.

Riley — who will be a big sister in a few weeks — didn’t look too enthused to be on the stage either:

Maybe she was annoyed because it was way past her bedtime, even in a different timezone. Maybe she already knows how much of a media sensation she is and she was just playing cute for the crowd. Maybe she felt some type of way about the fact that her dad wasn’t crowned the Finals MVP.

Who knows? Who cares? RILEY IS THE CUTEST THING EVER.

For what it’s worth, little Riley looked sleepy near the end of the game, but her mom — Steph’s wife Ayesha — told her to stay up because “Daddy’s gonna win the whole thing.” And he did!

As usual, Twitter ate up all of Riley’s little antics:

"Get me the hell out of Cleveland, Ohio." – NBA champion Riley Curry

Please let there be a tiny mic for Riley Curry at the post-game conference.

Elect Riley Curry for princess of everything.

All I care about right now is #RileyCurry. Where she at? #NBAFinals

Give the people what they want to see!!! More of Riley Curry!!!

Retweet if you can't wait for Stephen Curry to bring Riley Curry to the podium after the game! pic.twitter.com/8gxx845hxZ

Riley Curry gonna be at the podium tonight like pic.twitter.com/MLI9DTJR4P

I just want Riley Curry to adopt me.