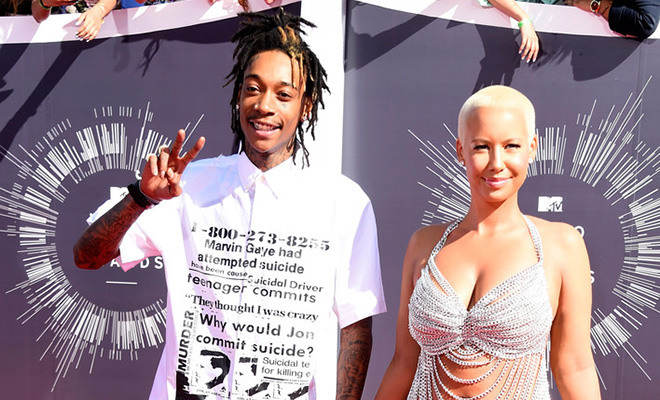 Well this is pretty shocking … and we can honestly say we didn’t see this one coming.

Since they started dating in 2011, Wiz Khalifa and Amber Rose have appeared to be a match made in heaven (with of that tongue-licking and groping on red carpets and wherever else).

The couple had a son at the beginning of 2013 and tied the knot in July of the same year. Just last month, Amber even shared photos from the wedding on Instagram in celebration of the couple’s first anniversary.

But now it’s apparent that things between Wiz and Amber weren’t as great as they seemed.

TMZ is reporting that Amber filed for divorce on Monday and cited “irreconcilable differences” as the reason for the break-up and she’s seeking “full legal and physical custody” of their son Sebastian, who will be 2 years old in February. “She’s willing to give Wiz visitation,” TMZ reports.

And this is interesting. Amber acknowledges there’s a prenup, which you would think would work in Wiz’ favor, but she says it’s valid … presumably, she’s not challenging it. The docs say the prenup provides spousal support.

As for why they split, there’s been a buzz over the last few days of infidelity, but there’s no mention of it in the papers.

Sources connected with the couple say the split is bitter.

There’s also rumors that Amber has been hooking up with her new manager Nick Cannon, who’s also in the middle of a divorce battle with his wife Mariah Carey.