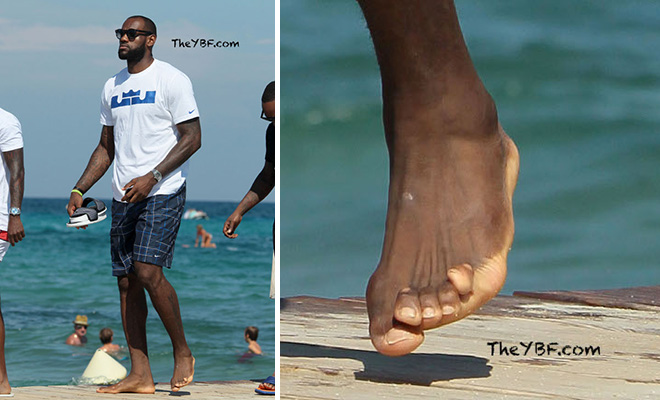 LeBron James is a phenomenal basketball player, with two back-to-back championship titles under his belt so far, but it looks like all of those trips up and down the court over the years have taken a serious toll on the NBA star’s feet.

These photos showing the Miami Heat player’s dogs barking like a mutha while he was on vacation with his fiancee Savannah Brinson over Labor Day weekend went viral on Reddit (via The YBF). There, it generated over 2,000 upvotes and thousands of comments from users wondering what on earth caused Bron-Bron’s toes to look like they were ran through a blender. “His toes should spread out more and play zone defense,” joked one Redditor. “And I just threw up a little,” quipped another.

Others theorized that maybe wearing tight basketball shoes all his life caused the two-time NBA champ’s feet to deform, but then that would mean all basketball player should have jacked up toes.

“It’s not that strange,” Reddit user CaptainNoBoat explained. “He probably had an unusually shaped foot growing up (longer than normal, or wide toes.) Finding a shoe that fit probably pushed his toes up and together. Lots of prolific athletes get oddly-shaped feet from their footwear.”

It’s true that LeBron James isn’t the only athlete with scary-looking feet. Many users in the Reddit thread pointed out that world-class sprinter Usain Bolt has ugly feet too, most likely caused by wearing sprinting shoes too much.

Moral of the story … athletes need to wear shoes (or at the very least some socks) at ALL times.