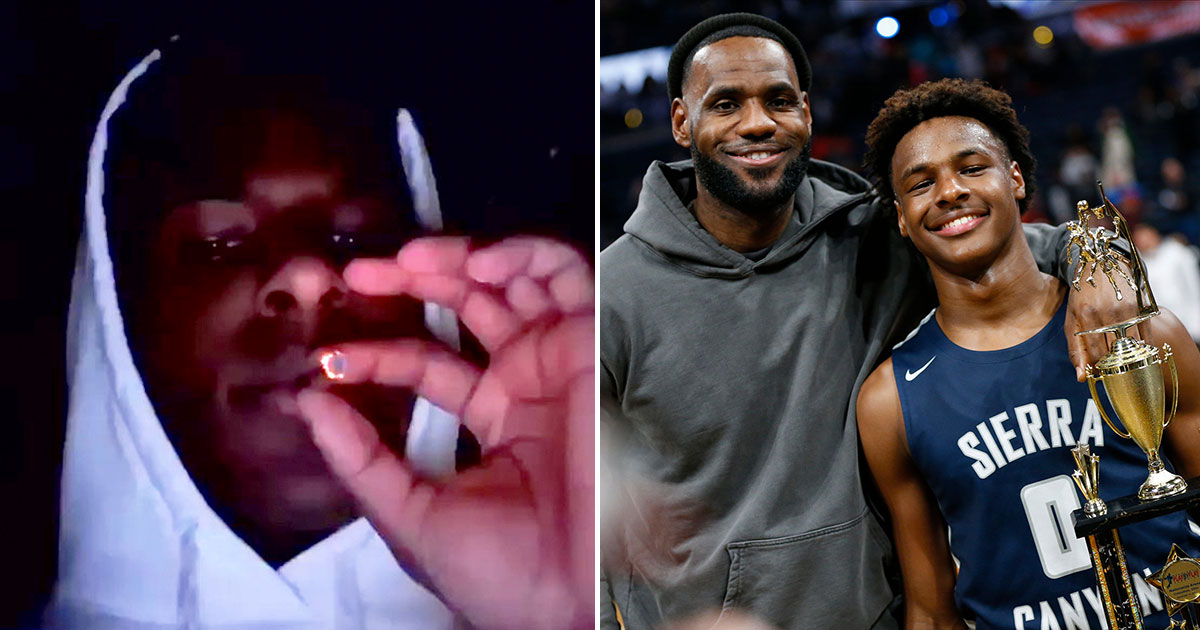 LeBron James’ son Bronny has gone viral on social media after he accidentally posted a video of himself on Instagram appearing to smoke weed.

The video shows the 15-year-old in a dark room taking a hit from what looks like a blunt.

Bronny quickly deleted the clip (maybe he meant to send it to his “close friends?”, but not before some of his more than 5 million followers downloaded it and re-shared it all over Twitter.

Bronny’s name quickly became a worldwide trending topic on Twitter (and still was at the time this article was published) with many users pointing out how pissed his dad is going to be once he finds out.

Bron when he gets home and sees Bronny tonight pic.twitter.com/VGWZEMVcEz

Bron waking up Bronny to address smoking that blunt after getting home from the bubble: pic.twitter.com/dT9dVox8JT

Lebron before he gets home to whoop Bronny pic.twitter.com/DupMnnh29C

Bronny a half hour later:

LeBron: Was that you on video smoking weed?

Stephen A on a FaceTime with Bronny pic.twitter.com/2iImpbGW6G

Lebron when he gets home and sees Bronny pic.twitter.com/4Zoi4pMXGs

LeBron to bronny after seeing his story: pic.twitter.com/oLR9RaNSLW

Bronny trying to explain things to his dad pic.twitter.com/21lq3o9Z0T

Rip bronny??he ain’t dead but he boutta he dead when lebron see’s this. pic.twitter.com/QP929INb7F

Bronny just finished his freshman year at Sierra Canyon School—a private school in Chatsworth, California which is about a half-hour north of Los Angeles.

Even before he started high school, Bronny was already on college recruits’ radar, as he reportedly received scholarship offers from a number of schools when he was just 10 years old.

At age 15, Bronny currently stands 6-foot-2 and weighs 175 pounds, and he’s drawn an incredible amount of interest due to the fact that he’s highly skilled in both guard positions.

LeBron James has previously said that he hopes to play in the NBA long enough to be in the league at the same time as his son.