GOSSIPONTHIS.COM Politics What Dennis Rodman and Hillary Clinton Seem To Have In Common 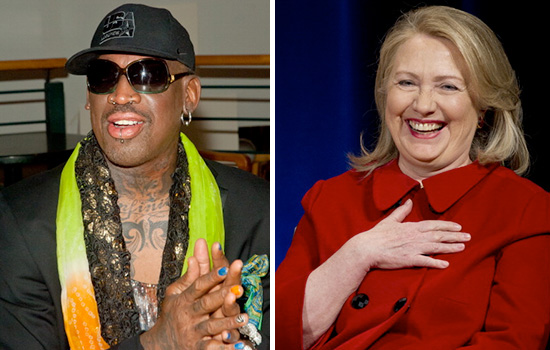 With a headline like that, I could really take this a thousand different places. You nervous? Don’t be.

Dennis Rodman is back in the headlines, and this time, it isn’t for a marriage, divorce, or even for wearing a wedding dress —  but the former basketball phenom IS in the news for a new relationship he’s formed with none other than North Korea’s Kim Jong Un. Now before you check out on me, because this is the part where that’d be easy, hang with me. If you hadn’t heard, to make a long story short, Dennis Rodman just got back to the States after traveling abroad to hang out with the dictator of North Korea. At first, I thought this was about as profound as Kim Kardashian meeting Ahmadinejad. But then after a little more thought, I realized: this is kind of epic, kind of annoying, and then kind of epic all over again.

It’s kind of epic on a number of levels. How did Dennis Rodman and Kim Jong Un become besties in the first place?

North Korea is notoriously insulated. North Koreans aren’t tweeting from their iPhones, updating their statuses and tagging Facebook photos on their iPads, and probably didn’t really catch on to the South Korean-native Psy’s Gangam Style craze.

It’s not likely Lil Kim (nickname for Kim Jong Un, after rising to power when his father Kim Jong Il passed away in 2011) was following Dennis on Twitter, Dennis followed back and they started DM-ing.

It’s also rather unlikely that the pierced and tatted Rodman just stumbled upon KJU and they just clicked. KJU reportedly speaks broken-English and I doubt they sat next to each other on a flight. Some people believe Rodman was paid to make the trip, seemingly to cause a media frenzy… like… it… has… and to bring more attention to North Korea.

You may remember it was barely a month ago the country made headlines when they reportedly tested a nuclear weapon that was aimed toward the United States. The United States has (seemingly) had very little success getting some of the most official communications into North Korea, and then comes Dennis Rodman.

Of all the celebrities to invite to North Korea and spark headlines, conversations, and cause me to have to message my dad at late hours to get his opinion, why Dennis Rodman? There are a host of other people that are basketball players, and washed-up former stars of not only Celebrity Apprentice, but also Celebrity Rehab.

The choosing of Dennis Rodman leads me to believe that this stunt was just that, a publicity stunt. It’s not really a secret that reports of Rodman’s financial woes are abundant. He’s also supposedly in exceedingly poor health. The scent of this story to me reeks of “cut me a check and I’ll put on a show.”

It’s annoying because it causes us to have to discuss, and look at, Dennis Rodman yet again.

KIND OF EPIC ALL OVER AGAIN:

Finally, it’s kind of epic all over again because I’m reminded of Senator Barack Obama in the 2008 presidential debates.

When questioned about whether or not he’d be willing to take meetings and converse with our enemies, he caught a lot of flack and was called naive for saying he would, from just about everyone, the right, the left, and even Hillary Clinton.

It was ground-breaking at the time because, at that time, our current president had us in two wars, and always seemed like he had his cowboy boots on and his gun on his holster ready for the next fight. This was a radically different perspective for a prospective new White House tenant.

But this week, the Obama administration has made indication that it will not be taking Rodman’s only real coherent piece of advice from his trip, to “call him” … ‘him,’ being Kim Jong Un. When Rodman was interviewed on Sunday morning political chat show This Week with George Stephanopolous, he said that KJU wanted Obama to just “call him,” citing that he did “not want to do war.”

Now honestly, if there’s anything that Dennis Rodman said in his interview that helped him, it was discussing the less-than-olive-branch-extending request. While it seems this would be in line with President Obama’s views on taking calls from anyone, today it seems that policy has been suspended.

You won’t find many bigger fans of our great Commander-in-Chief than you will in me, but it does beg the question: “Why not just ‘call him,’ Mr. President?”

It’s kind of epic all over again, because it’s Dennis Rodman putting the president into quite the predicament.

As Secretary of State, and arguably one of the best we’ve ever had, Hillary Clinton wanted to but never got to Kim Jong Un … but Dennis Rodman did. Will the president accept the opportunity, pick up the phone and talk to one of the world’s most violent and hated leaders? Only time will tell.

As for Dennis Rodman’s future itineraries in the East, he says he wants to go back to “find out more.” Great. Dennis Rodman wants to be a diplomat. I think need a tall glass of iced bleach.

But then again, what do I know?

PHOTOS FROM DENNIS RODMAN’S TRIP TO NORTH KOREA ARE BELOW: