The United States Justice Department announced this week that it will launch an investigation into the shooting death of 17-year-old Trayvon Martin, who was killed almost a month ago by a racist, gun wielding neighborhood watchman.

“The department will conduct a thorough and independent review of all the evidence and take appropriate action at the conclusion of the investigation,” the U.S. government said in a statement Monday (Mar 20).

The announcement follows numerous protests held across the country calling for the arrest of 28-year-old George Zimmerman, who claims he was defending himself when he shot the teenager in cold blood on February 26th 2012.

Trayvon Martin was returning to his father’s house in a gated community in Sanford, FL after what was supposed to a quick trip to a nearby convenience store when he was shot and killed by Zimmerman.

When Zimmerman spotted Martin, he called 911, and told the dispatcher he thought the young, African American boy looked “suspicious” and continued to follow him, even after the 911 operator told him he shouldn’t.

“This guy looks like he’s up to no good, or he’s on drugs or something,” Zimmerman said to the 911 operator. “It’s raining and he’s just walking around looking at houses.”

“He’s just staring, looking at all the houses,” Zimmerman said. “Now he’s coming toward me. He’s got his hand in his waistband. Something’s wrong with him.”

Zimmerman, who described Trayvon as wearing a hoodie and sweatpants or jeans, continued, “He’s coming to check me out. He’s got something in his hands. I don’t know what his deal is. Can we get an officer over here?”

“These assholes always get away,” he calmly told the 911 operator. “Shit, he’s running.” At one point during his conversation with the 911 dispatcher, Zimmerman can be heard calling Trayvon a “coon.”

Within moments, more 911 calls were placed from within the gated upscale community describing a quick scuffle, cries for help and a gunshot.

Zimmerman claims self defense, however Trayvon Martin showed no signs that he intended to attack or otherwise harm Zimmerman. All he had in his possession was a can of iced tea and a bag of skittles.

Other people living in the neighborhood told officials they heard Martin pleading for his life, which was followed by a gunshot, then silence.

Zimmerman was taken in for questioning, but wasn’t arrested and right now isn’t facing any charges, which has sparked outrage amongst those who want justice for the shooting death of Trayvon Martin.

On Monday, college students held rallies on the on the campus of Florida A&M University in Tallahassee and outside the Seminole County Criminal Justice center, where prosecutors are reportedly reviewing the case to determine whether or not to file charges against George Zimmerman.

Sadly, changes made to Florida law in 2005 are preventing prosecutors from being able to charge Zimmerman.

Under the old law, people in fear of their lives could use deadly force in self-defense, but only if they had tried to run away or otherwise avoid the danger.

But under this new law, the person doesn’t have to retreat and has the legal right to “to stand his or her ground and meet force with force, including deadly force” if they feel threatened.

28-year-old George Zimmerman claims he felt threatened by Trayvon Martin, even though Zimmerman was twice the 17-year-old’s size and over 10 years his senior.

But there is no possible way Trayvon Martin could have displayed any signs of threatening behavior. All he had in his possession was a bag of skittles and a can of iced tea, and he was actually running from Zimmerman in fear of his own life.

Had the tables been turned and Trayvon had shot George Zimmerman … he would definitely be in jail. But sadly, almost a month after the incident, Zimmerman is still a free man. A march for justice for Trayvon held in New York City Wednesday evening (Mar 21), dubbed the “Million Hoodie March,” drew thousands and thousands of supporters who want George Zimmerman put behind bars for his heinous crime.

Demonstrators were heard chanting “we want arrests!” as they paraded through NYC’s streets. They greeted the teen’s parents with “God bless you!”

“My son did not deserve to die,” Trayvon’s father, Tracy Martin, said after thanking the large crowd.

Trayvon’s mother Sybrina Fulton told the crwod, “My heart is in pain, but to see the support of all of you really makes a difference.” At one point, the march dispersed into various groups, with some demonstrators traveling to Times Square to hold an impromptu rally, and dozens of others making their way to downtown Manhattan to hold demonstrations there.

Trayvon’s parents say they had no idea about the march beforehand, and had only found out about it while they were in town to do interviews about the case.

Daniel Maree, one of the organizers for the march, said that the timing of the teen’s parents being in the city when the march was happening was “incredible.”

“I was outraged and wanted to do something about it,” Maree said, adding that he first heard about the case earlier this week.

Asked how he was holding up, Tracy Martin said he was trying to stay strong.

What do you feel about how the Trayvon Martin case has been handled so far? 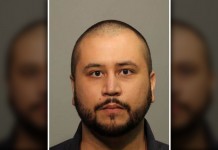 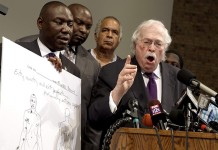