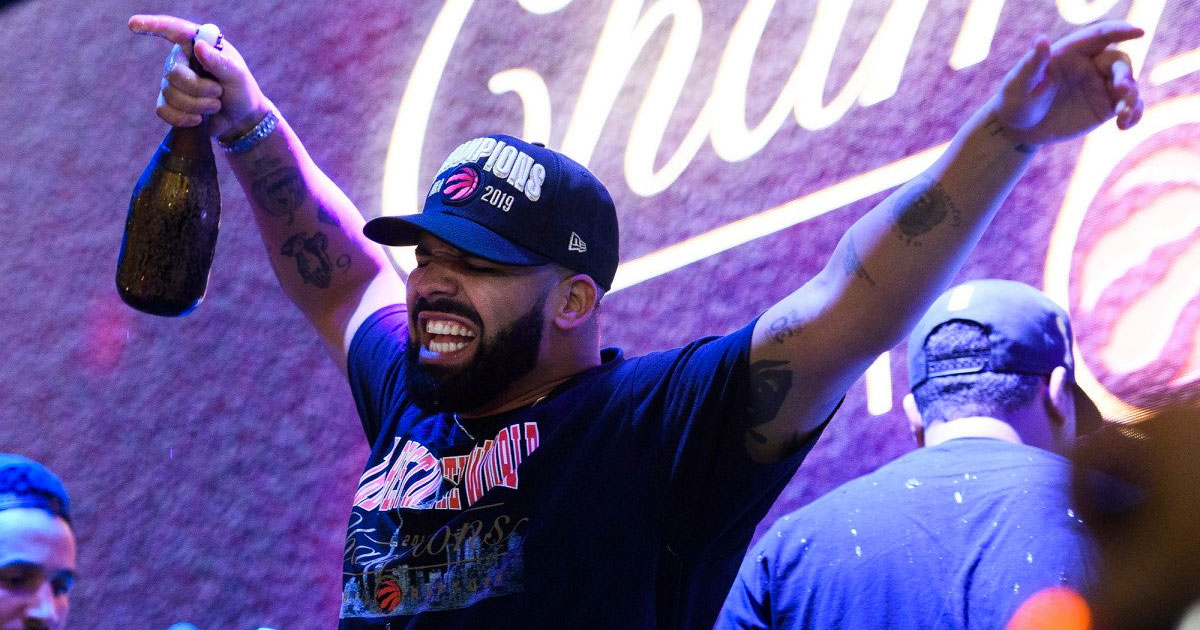 The Toronto Raptors won their first-ever NBA title in Oakland Thursday night (Jun. 13) after defeating the Golden State Warriors in Game 6 of the 2019 NBA Finals.

And there’s no one in the world happier than Drake right now:

Especially since the win also marks the official end of “The Drake curse.”

The Drake curse is over ?? pic.twitter.com/ZhimNFaQQi

In addition to popping ALL of the bottles tonight, Drake—a Toronto native and the official ambassador for the Raptors—is celebrating the huge victory by releasing not just one, but TWO brand new songs.

The Raptors superfan took to Instagram early Friday morning (Jun. 13) a little after midnight and announced the titles of two songs he plans to release this weekend: “Omertá” and “Money in the Grave” (feat. Rick Ross).

He wrote in the post’s caption:

Following the Raptors’ big win, Drake—dressed from head-to-toe in Raptors championship gear and holding the Canadian flag—spoke to reporters in a post-game interview, calling the moment “poetic” and saying that the team and its fans (including himself) “willed this into existence.”

Drake also said that he was praying for the injured Kevin Durant and David Ortiz, the latter of whom was shot in the Dominican Republic, but this night was all Toronto’s.

He concluded: “You see what my hats says, not Finals, not Eastern Conference, not nice try or see you next year, [but] champions … Let’s go! Real talk.”

Drake speaking on the Raptors being the 2019 NBA Champions. pic.twitter.com/wKctbSB44N

You already know Drake’s next album is gonna be FIRE!