GOSSIPONTHIS.COM Sports WATCH: Drake is Emotional As He Consoles Kevin Durant After Game 5... 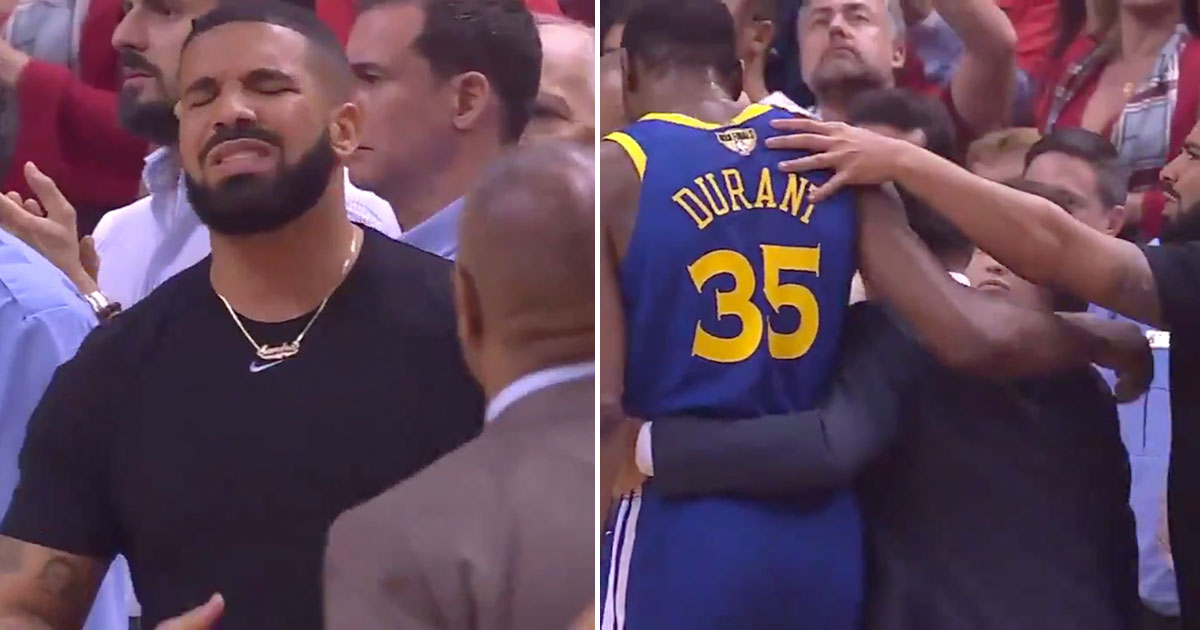 When Kevin Durant got hurt tonight, many Toronto Raptors fans cheered and mocked him … but Drake, on the other hand, cried when he realized it was over with for KD.

Durant suffered a pretty serious injury in Game 5 of the 2019 NBA finals Monday night (Jun. 10) in Toronto, and Drake couldn’t contain his emotions as one of his NBA idols was escorted off the court in pain.

The infamous Toronto fan, who has KD and Steph Curry’s jersey numbers tattooed on his left arm, appeared to be distraught as Durant limped off the floor.

Drake consoled Kevin Durant as he walked off in the second quarter. pic.twitter.com/05ZpHdL49l

Drake could be seen throwing his hands over his head in shock that Durant’s return to the court tonight had been cut short in the second quarter.

Durant was injured in the second quarter after scoring 11 points for the Golden State Warriors in just 12 minutes. He had missed the last nine games while tending to a strained right calf.

KD was spotted leaving the Scotiabank Arena in Toronto on crutches and walking with a boot on his right leg. Team officials said he will undergo an MRI on Tuesday (Jun. 11).

Kevin Durant seen in a boot and with crutches. #NBAFinals pic.twitter.com/RVMrhXbJeP

Durant’s presence in the game was sorely missed, as the Warriors barely came out with a 106-105 win, bringing the series to 3-2.