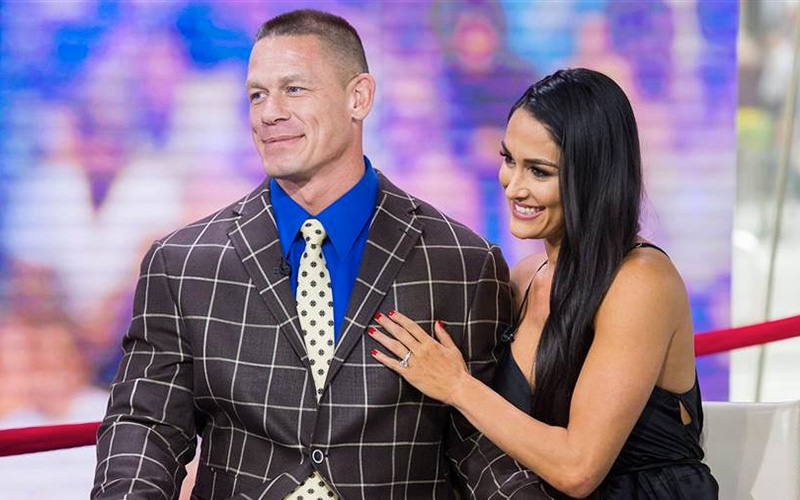 Sunday night (Apr. 2) was a big night for John Cena and Nikki Bella. Not only did the duo defeat The Miz and Maryse at Wrestlemania 33, but Cena followed up the victory with a very special surprise for his longtime girlfriend.

After claiming the victory, Cena grabbed a microphone, dropped to one knee, and proposed to Bella in front of a packed crowd. And in a moment that Hollywood writers wish they could conjure up, Bella answered yes with a big kiss and a large round of applause.

My Prince Charming made me his Queen in a place we call home ??Last night was truly unforgettable. A dream come true! N pic.twitter.com/voHOKAwE2q

The newly engaged couple followed up their big night by appearing on Today to discuss the momentous occasion and their plans moving forward.

Since the engagement just happened Sunday night, there is still a lot up in the air as to the specifics of the wedding. When asked about the potential date, Cena simply replied, “That’s up to the boss,” while gesturing to Bella to his left.

Bella, however, is ready to roll. “I’m ready to get this party started,” she told the Today crew. One thing is for certain, though. When asked if the wedding would be in the ring (a fitting venue, given the couple’s career and choice of engagement location), they both replied with a laugh, “No.”

I’m sure the wedding will be quite the event, but let’s be honest, it’s going to be tough topping winning Wrestlemania and getting engaged in front of millions of viewers. You set the bar high, Cena. Let’s see if you two can top it.
Published April 4th, 2017 at 1:00 am