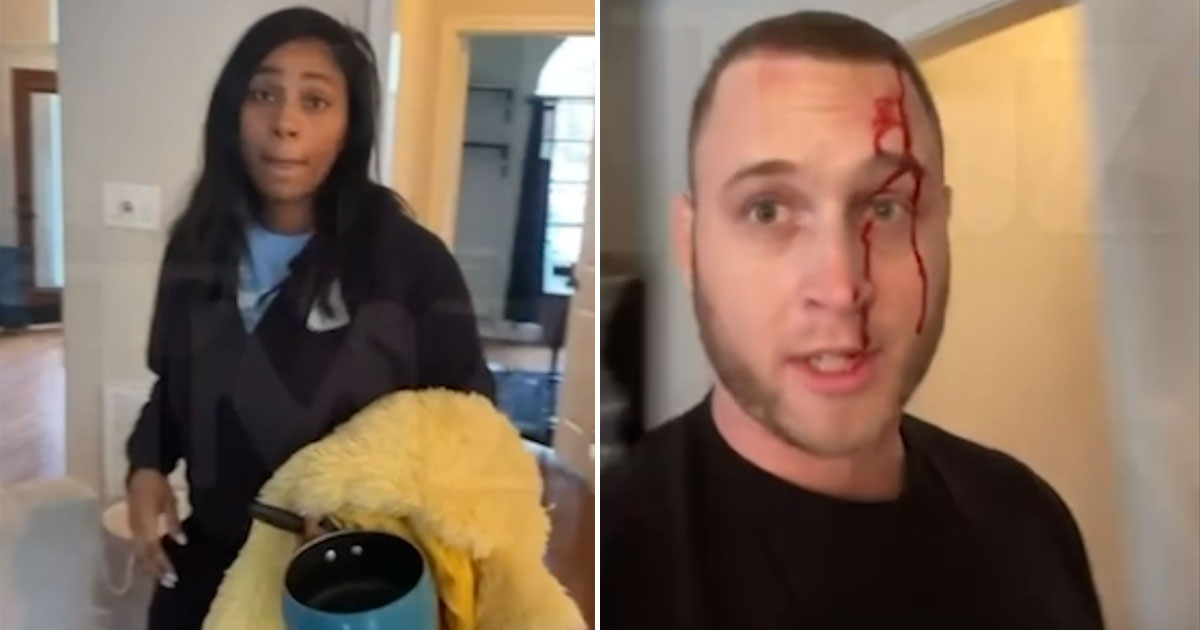 Chet Hanks and his ex-girlfriend Kiana Parker are accusing each other of domestic violence in separate incidents, with him allegedly threatening her and telling her she’s “just a ghetto black bitch” in one incident.

Video footage obtained by TMZ shows the tail end of a physical altercation between Chet and Kiana at Chet’s home in Sugarland, Texas.

In the footage, which was recorded on January 8th, you can see Hanks and Parker exchanging words while she holds a pot in her hand. Parker asks Hanks to back up and then the camera goes black after Parker appears to swing at him.

In the next frame, a bloody-faced Chet reappears and accuses Kiana of attacking him with a knife, which she denies, saying that he pushed her.

The third and final frame shows Hanks saying Parker was “mad” because he’d caught her stealing his money to pay her bills.

As for Kiana’s accusations of violence, a judge granted her a restraining order against Chet back in January after she alleged he’d gotten physical with her on several occasions between October 2020 and January 221.

During one particular incident, while they were in New Orleans for Chet to film the Showtime TV show “Your Honor,” Kiana said Chet got really angry with her after she said she was going to leave their room at the Windsor Court Hotel to go get some food.

When she tried to leave anyway, he chased her down the hallway in his boxers, grabbed her by her arm, flung her around, and forced her back into the room.

Parker said Hanks then threatened her and told her “he was Chet Hanks and I wasn’t shit, no one would believe me, I was just a ghetto black bitch.”

She said tables were knocked over during the altercation and he threw a bottle at her.

Parker also said Hanks told her he would “jump off the balcony” if she left him, and told her “it was his hotel room and not mine, I was just a visitor and would be the one that got in trouble,” among other things.

Kiana said she told security everything was fine just to keep the peace and because she feared she’d get in trouble and would tarnish his image.

During a separate incident, Kiana accused Chet of threatening to commit a murder-suicide.

“He told me he would ‘blow my brains out’ and that he ‘didn’t want to live and would blow his brains out’ as well,” she said in the court documents. She continued: “I had my nine-year twins in the house with us. It was around 3 a.m. and I waited until he went to sleep and took my girls to the house with my mom. When I came back to the house I hid his gun so that he could not find it.”

Chet denies all of Kiana’s allegations and recently filed a lawsuit against Kiana over the January incident that left him with a bloody face. He said that incident started when he broke up with her after finding out she’d been stealing from him.

He said Kiana showed up with three men that day, one of the men flashed a gun at him. He’s reportedly suing her for assault and battery and theft, and is asking her to return the money she allegedly stole from him.

In Kiana’s version of that incident, she says she came by Chet’s house to get her stuff with movers, and Chet started antagonizing her and menacingly grabbed a knife.

She said that’s when she grabbed a pot in self-defense and swung it before running outside the house. She said he chased her out to the street and attacked her until people came to help.

“The day after Chet Hanks confronted Kiana Parker about stealing money from his credit card, while Ms. Parker was accompanied by a huge male carrying a gun she viciously attacked Chet with a knife, which caused him to profusely bleed,” Singer told TMZ. “It is all on video and the undisputed video tells the whole story.”

All of this coming to light is very interesting considering the fact that Chet—who shares a child with another Black woman named Tiffany—has been bragging about how he’s really into Black women after his controversial “white boy summer” clip went viral.

He’s even gone as far as to start selling merch that says “White Boy Summer,” and he says he’s working on another line of merch with shirts that say “Black Queen Summer.”