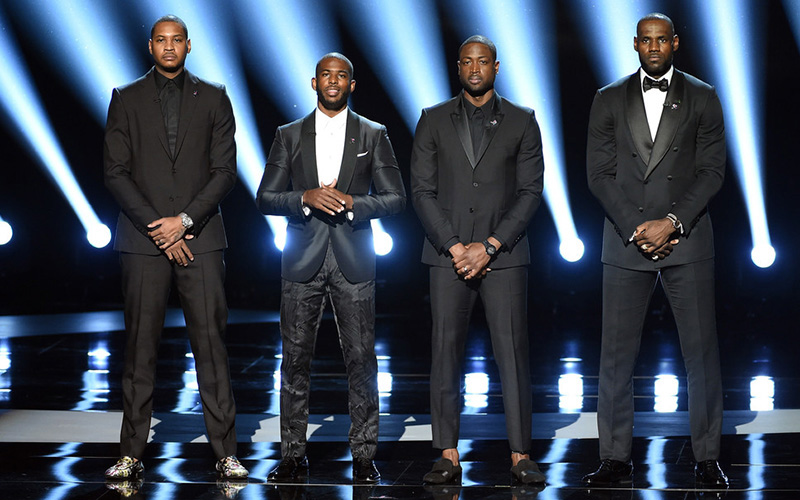 No one ever really expects much out of the ESPYs, which has always been a showcase of awkward moments where sports stars are taken out of their comfort zone and paraded around like actors. But Wednesday night’s (Jul. 14) show opened up with a powerful, meaningful, and downright needed message from superstars LeBron James, Carmelo Anthony, Chris Paul and Dwayne Wade.

In a statement clearly influenced by the current racial landscape plaguing our nation, the four called for action in regards to the needless gun violence around the country, both in the streets and by the police.

Melo opened the remarks by saying, “The events of the past week have put a spotlight on the injustice, distrust, and anger that plagues so many of us. The system is broken. The problems are not new. The violence is not new. And the racial divide, definitely, is not new.”

Next up was Paul, who was in an interesting position. A supporter of the BLM movement and ending the needless killings around the country, Paul is also the nephew of a police officer, and therefore understands more than most the complexities of the issues we face.

“Not seeing the value of black and brown bodies has to stop,” said Wade before LeBron joined in calling for all of the athletes to use their stance in popular culture to affect change in a way that most of us cannot.

Having these four men, representing the biggest cities in the country (New York, Los Angeles, Chicago, and Cleveland), stand up before a viewership of millions and impart this message is a powerful, and necessary, thing.

As protests and riots rage across the country over the unjustified killings of African Americans at the hands of police officers, as innocent police lives are taken by sniper fire while trying to maintain peace, and while gun violence runs rampant in the streets of our biggest cities, it’s easy for most of us to feel, “helpless and frustrated by the violence.”

But as LeBron said, that’s not acceptable. These four men called upon their fellow athletes, and, in essence, all of us, to do what we can to end the needless violence we face today. They asked us to put an end to the fear young black men feel when being pulled over by the police for a minor infraction; to put an end to the counterproductive retaliation against all police; and ultimately, to call an end to the racial divide we currently have in our country.

The fact that these four men stood up to deliver this message shouldn’t be surprising. They have all participated in spreading the message and fighting the good fight in the past. LeBron and Wade led the Miami Heat in wearing hoodies in protest of Trayvon Martin’s death, and just last week, Carmelo called upon his fellow black athletes to follow in the footsteps of civil rights pioneers.

On a night that saw an honoring of the late, great Muhammad Ali, one of the greatest advocates of equal rights and fighting the crooked system, it is only fitting that this message would be delivered. And what I respect most about this is that they fought for their right to deliver it.

The start of the show was not a network idea. LeBron, Carmelo, CP3, and D-Wade approached the network and asked to open the show. #ESPYS

This wasn’t a network decision, something that the organizers of the ESPYs thought would be a good idea. The four asked to open the show so that they could practice what they preach: using their status to spread the word and affect some kind of much needed change.

And for that, I believe much respect is due. But as they said, talking about this simply isn’t enough. Fighting over it for a few weeks before eventually moving on is not enough. I only hope that their message is heard, loud and clear, and that we all do our part to follow through on it.