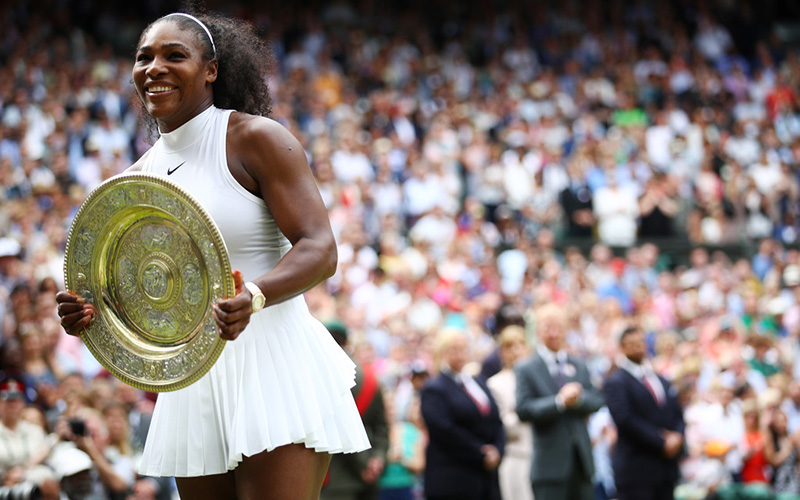 Can we make it official, already? Serena Williams is the GOAT!! You can debate it all you want, but Williams is seriously one of the greatest athletes of all time. At the conclusion of the prestigious 2016 Wimbledon Championships, the tennis player walked away with two trophies while making history in the process.

In competitive straight sets, Williams defeated Angelique Kerber to win her 22nd Grand Slam Singles titles. 22!!! She now ties Steffi Graf with the most singles titles in the Open Era. With 24, Margaret Court has the most of all-time and Williams is well on her way to match — and possibly surpass — that feat.

Serena is warmly congratulated at the net by Kerber after winning her 22nd Grand Slam title. https://t.co/y4eiNRGvcl

Just a few hours later, Serena joined her sister, Venus Williams, for a doubles final. The unseeded team were victorious in very entertaining straight sets. This is the sisters’ 14th doubles title. Amazingly, they are 14-0 in doubles finals. Come on? How is that even possible? Many celebrities were spotted at Serena’s singles match, including Ellen DeGeneres, Natalie Portman, and Game of Throne’s Maisie Williams. However, the biggest stars in the crowd were Beyoncé and Jay Z, who had the honor of sitting in Serena’s player’s box. You may recall Serena had a twerk-tastic cameo in Beyonce’s visual album, Lemonade.

Serena and Venus are both headed to the Olympics in Rio. Let’s go!