GOSSIPONTHIS.COM Crime Aaron Hernandez Beat the Crap Out of Jail Inmate Who Was Harassing... 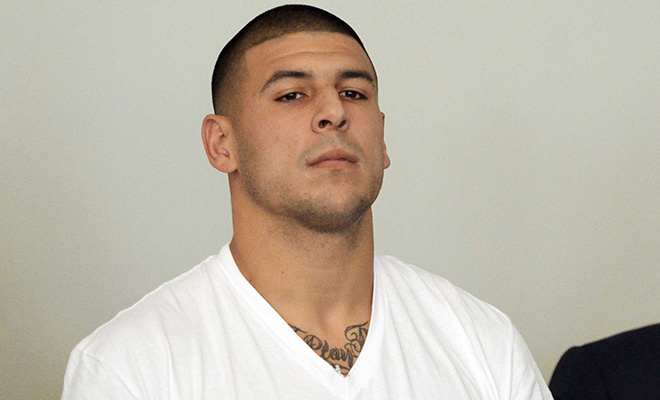 Aaron Hernandez already has a lot on his plate, with him being accused of murder and all, but a recent prison fight has now triggered an internal investigation at Bristol County Jail, according to TMZ reports.

Last week, TMZ Sports broke a story on how Hernandez attacked another inmate who had been harassing him “nonstop” at the prison, and he reportedly “beat the guy up pretty good.”

Sources tell us the former New England Patriots tight end — who is usually segregated from the general population — was allowed to take a walk in an isolated hallway … but somehow came into contact with another inmate.

We’re told Hernandez recognized the other inmate and launched into an attack — beating the other man up pretty badly.

Sources tell us … Hernandez and the other man had been beefing all day long. One source says the other guy had been harassing Aaron nonstop. Clearly, Hernandez was pissed.

The next day, TMZ posted an update to their original story with additional details:

Our sources tell us … it was no secret Aaron and the other guy had been mouthing off at each other for some time … and now officials want to know how in the hell they both ended up in the same hallway at the same time.

Now, Bristol County Sheriff Thomas Hodgson says officials are talking to witnesses and checking jail cameras to find out exactly what went down.

The victim in the Aaron Hernandez jail fight was in HANDCUFFS at the time of the attack … and therefore couldn’t defend himself … sources extremely familiar with the situation tell TMZ Sports.

Our sources tell us … Aaron was NOT wearing handcuffs when he was allowed to go for an isolated walk in a hallway at Bristol County Jail on Tuesday … but the other inmate he encountered WAS in ‘cuffs.

As we first reported, the other inmate had been talking smack to Hernandez … and Aaron had been upset. When they got into the hallway, Aaron attacked … and we’re told he beat the crap out of the guy.

Our sources say … since the victim’s hands were restrained, he could barely defend himself from Aaron’s assault, which we’re told was brutal.

Bristol County Sheriff Thomas Hodgson has told other media outlets, the fight lasted less than a minute. Hodgson says he’s investigating the situation to find out how the men got into the hallway at the same time.

A rep for the jail had no comment. We reached out to Hodgson about this story multiple times … he won’t return our calls.

Aaron Hernandez has been locked up since last summer, and he is facing murder charges for the 2013 shooting death of semi-pro football player Odin Lloyd. He and two other men, Carlos Ortiz and Ernest Wallace, were taken into custody in late June for their alleged connections to Lloyd’s killing.

Hernandez was indicted on the first degree murder charge in August, and he pleaded not guilty to the murder in early September. If convicted, the pro footballer faces life in prison without the possibility of parole.

Due to his celebrity status, officials had placed the NFL player in solitary confinement out of concern that he would be a target behind bars, but clearly … these fools in jail don’t want none with Aaron Hernandez!