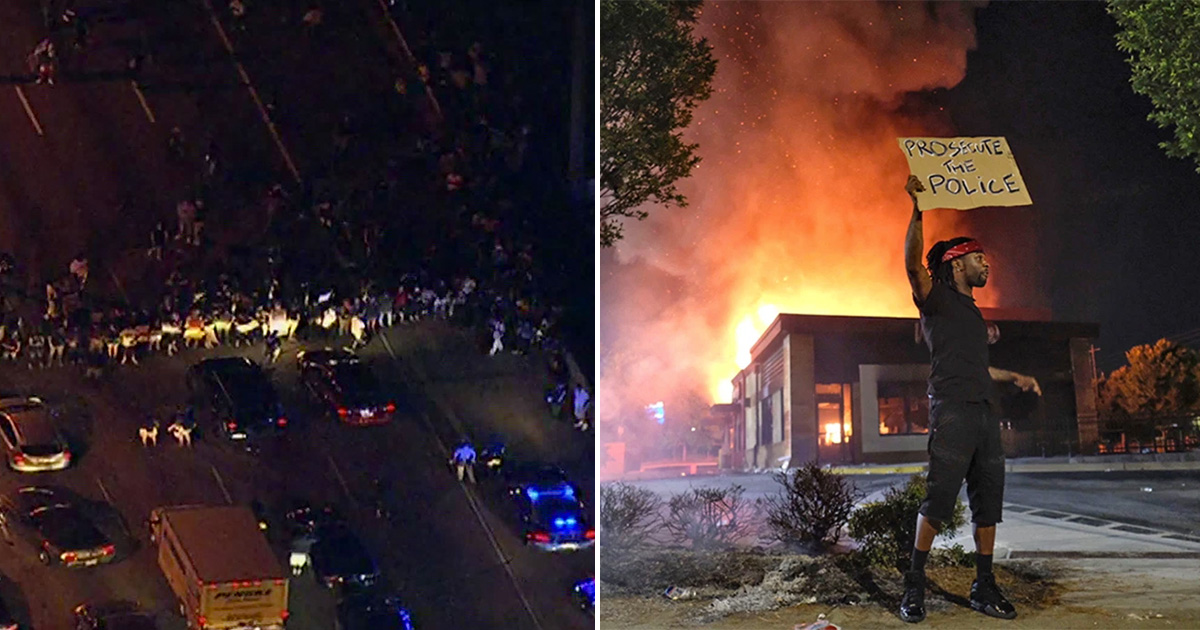 Protesters angry over the police killing of an unarmed black man at a Wendy’s drive-thru in Atlanta marched onto the highway late Saturday night (Jun. 13), shutting down part of the Interstate 75/85 downtown connecter, which is a major road through the city, CNN reports.

Protesters in Atlanta shutdown an interstate after the murder of Rayshard Brooks by police. #RayshardBrooks #AtlantaShooting #BlackLivesMatter pic.twitter.com/xoxQpjoVuC

A crowd of people also set fire to the Wendy’s and the surrounding area in response to the police killing of 27-year-old Rayshard Brooks.

The restaurant sits near a BP gas station and initial reports indicated there was no sign of firefighters.

The Wendy’s in #Atlanta where #RayshardBrooks was executed by race soldiers last night, is currently on fire pic.twitter.com/o89yc6A88P

HAPPENING NOW: The Wendy’s where #RayshardBrooks was killed by Atlanta police has been set on fire.

The restaurant is next door to a BP gas station & there is no sign of firefighters. pic.twitter.com/TZsa69LV2w

The Wendys where Atlanta Police shot and killed #RayshardBrooks has been lit on fire by protesters: pic.twitter.com/8i5uiAjPHp

There goes @Wendys on University Ave.

I had to step away for my own safety but here is a look at rioters right before they lit a firework in the Wendy's where #atlantapolice shot and killed #RayshardBrooks @FOX5Atlanta pic.twitter.com/rR0XdDkaBk

Initial reports about the fire came just after 9:30 p.m. EST, and by 11 p.m., the entire restaurant was engulfed in flames, leaving the building completely destroyed.

Fire at Wendy's on University Ave in southwest Atlanta raging. A night to remember in Atlanta: Rayshard Brooks shot by an officer, the chief of Atlanta police resigned, and protesters stormed the interstate. Now, fire. #AtlantaShooting #AtlantaProtest pic.twitter.com/Fgjq7jhDiZ

Rayshard Brooks had allegedly fallen asleep in his car and blocked the restaurant’s drive-thru line, forcing customers to have to drive around his vehicle to pick up their food, when Atlanta police were called Friday night (Jun. 12).

According to a report from the Georgia Bureau of Investigation, two officers with the Atlanta Police Department tried to place Brooks under arrest after he failed a sobriety test.

During the arrest, Brooks allegedly resisted and a brief struggle ensued before an officer deployed a Taser.

Witnesses said Brooks grabbed the Taser from the officer before the second officer got involved and also tried to tase Brooks.

Brooks then started to run away, at which point both cops started chasing him. Within seconds, three shots were fired, hitting Brooks in the back and mortally wounding him. He was rushed to the hospital, where he died during surgery.

Newly released surveillance footage showed the moment Rayshard Brooks was shot and killed. Police said Brooks pointed the taser at the officer who shot him as he ran.

GBI released video that shows the moment Rayshard Brooks was shot and killed by an Atlanta Police officer at a Wendys on University Ave last night. Police say Brooks had taken an officer's taser and pointed it at the officer as he ran. pic.twitter.com/1G8fn03gFV

Atlanta police chief Erika Shields resigned Saturday afternoon, less than 24 hours after the incident. Additionally, the officer who shot Brooks—who has since been identified as seven-year APD veteran Garrett Rolfe, has been fired.

The other officer involved in the fatal altercation, Devin Bronsan, has been placed on administrative leave.

“While there may be a debate about whether this was an appropriate use of deadly force, I firmly believe there is a clear distinction between what you can do and what you should do,” Bottoms said before calling “for the immediate termination of the officer.”

Bottoms said Shields, who’d been the Atlanta Police Chief for three-and-a-half years will be reassigned to another role and the decision to step down from the position was Shields’.

“Because of her desire that Atlanta be a model of what meaningful reform should look like across this country, Chief Shields has offered to immediately step aside as police chief so that the city may move forward with urgency and rebuilding the trust that is desperately needed throughout our communities,” Bottoms said.

Shields had been under fire recently after six APD officers were arrested for using excessive force on two Black college students during protests last month. Video footage, which aired live on television amid protest coverage, showed the officers yanking the students out of their cars after macing and tasing them.

Brooks’ police killing has added more fuel to ongoing protests against police brutality and racial injustice since the death of George Floyd at the hands of police in Minneapolis.