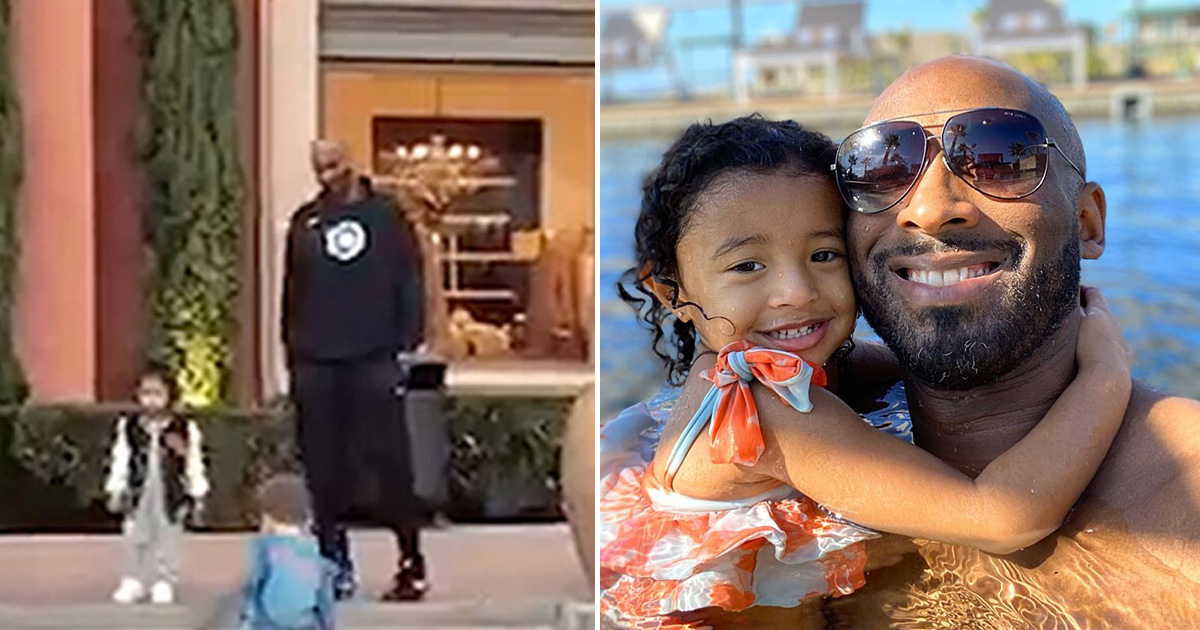 Kobe Bryant was a dedicated father to the very end, without even realizing it.

On Saturday night (Jan. 25), just hours before he and his 13-year-old daughter Gianna died along with seven others in a helicopter crash in Calabasas, California, Kobe was seen spending quality time with his 3-year-old daughter Bianka.

TMZ Sports obtained exclusive footage of the 41-year-old and his second-to-youngest daughter hanging out at the Fashion Island mall in Newport Beach the night before the tragedy.

The footage shows them playing at the shopping center’s koi pond and walking through the stores.

The Bryants were regulars at the mall and other local spots. In other words, it wasn’t unusual to see Kobe around town with his kids.

At that moment, Kobe had no idea that would be the last time his 3-year-old daughter would see him alive, which makes the footage extremely devastating to watch.

Not even 24 hours later, on Sunday morning (Jan. 26), Kobe and Bianka’s older sister Gianna (aka “GiGi”) were tragically killed when the helicopter they were flying in crashed en route to GiGi’s basketball game at Kobe’s Mamba Sports Academy in Thousands Oaks.

GiGi’s team, the Lady Mavericks, were playing in the Mamba Cup basketball tournament and Kobe was expected to coach.

The tournament was later canceled and video footage showed the team in a somber moment mourning Kobe, GiGi and the other passengers’ tragic deaths.

Spending quality time with his four daughters was very important for Kobe, which is why he even started riding in helicopters in the first place.

In a 2018 interview with the Barstool Sports podcast “The Corp With A-Rod and Big Cat,” Bryant said his decision to use helicopters as a method of transportation came from him wanting to be a doting dad while also trying to balance his job as a star player for the Los Angeles Lakers.

As most people know, L.A. traffic is the absolute worst. And with his wife and kids living in Newport Beach, and him working over 40 miles away in Los Angeles, solely relying on ground transportation would make it nearly impossible for him to be an always present dad while also being able to regularly train and attend practices with his teammates.

“I had to figure out a way where I could still train and focus on the craft but still not compromise family time. And so that’s when I looked into helicopters, to be able to get down and back in 15 minutes. And that’s when it started.”

“Because, like, you have road trips and times when you don’t see your kids, man,” he added. “So like every chance I get see them and spend time with them, even if it’s 20 minutes in the car, like, I want that. Right? So that would be my routine.”

Kobe Bryant on why he began traveling by helicopter: https://t.co/waTOwHcG4J

"I wound up missing like a school play because I was sitting in traffic— I had to figure out a way where I could still train…but still not compromise family time." ?pic.twitter.com/ELxdar7fhg

It’s sad knowing that the same thing that allowed a busy father to spend more time with his children also took him away from them. Even sadder is the fact that one of his children perished along with him.

All nine passengers of the helicopter have since been identified, including Kobe and GiGi, husband-and-wife John and Keri Altobelli, ages 56 and 46, respectively, their daughter, Alyssa, 45-year-old Sarah Chester and her daughter Payton, Christina Mauser, 38, a basketball coach at Gianna’s school, and the pilot, Ara Zobayan, who was 50.

An investigation has been launched to determine what exactly caused the copter to crash, though officials are speculating that heavy fog in the area played a major role in the tragedy.

It’s been said that Zobayan was a very experienced pilot who had flown Kobe and his family (and other celebs like Kylie Jenner) in that same helicopter for years.

It was just two months ago that Kylie rented the Sikorsky helicopter for her niece Dream’s (Rob Kardashian’s daughter) third birthday.

Kylie addressed the crash on Monday (Jan. 27) via her Instagram stories, posting a photo featuring all nine victims along with a poignant message about always keeping your loved ones close.

“Rest in peace..and prayers to these families,” she wrote. “I still can’t believe this. That was the helicopter I would fly on from time to time with that pilot, Ara. He was such a nice man. Hold your loved ones close.” 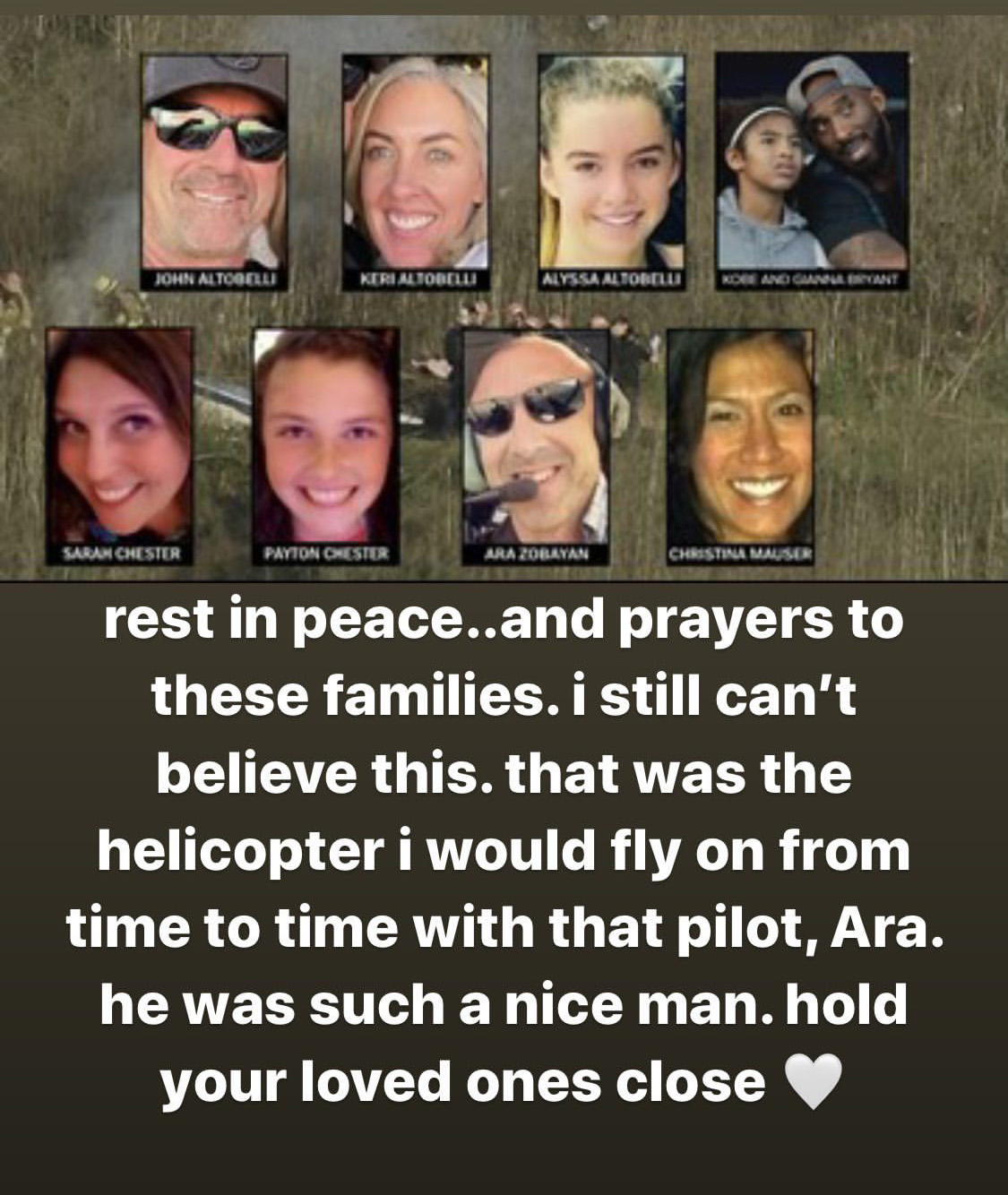 As of Monday afternoon, officials said they’d only been able to recover three of the nine bodies from the crash site, though they didn’t specify the IDs of the victims who’ve been found.

Officials worked well into Sunday night, but were forced to suspend the search due to darkness and safety concerns, TMZ reported. They continued their search Monday morning, but haven’t released any updates about whether any other remains had been recovered.

Kobe and Gianna Bryant are survived by wife/mom Vanessa, and daughters/sisters Natalia (who just turned 17 years old on January 19th), 3-year-old Bianka, and Baby Capri, who will celebrate her first birthday on June 20th.