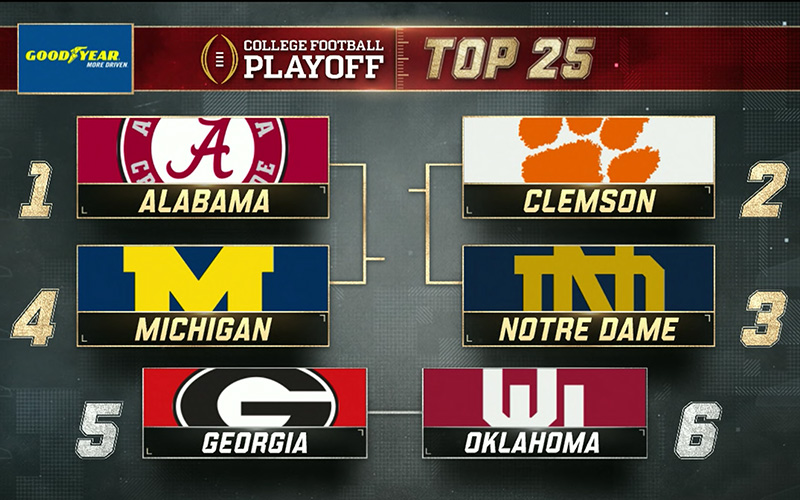 After a winning week in college football, the Top 10 CFP (College Football Playoff) Rankings remained unchanged in Tuesday’s release of the third list. This is the first time in the history of the rankings that has happened.

“These are complete teams,” committee chair Rob Mullens said when asked about the gap between Alabama and Clemson. “We spent a lot of time talking about it. They are both top-10 offenses, top-10 defenses, but at this point, everyone has Alabama one, Clemson two.”

There was shuffle beyond the top 10, with some losses dropping a few teams and knocking out others altogether.

UCF’s No. 11 ranking is the highest for a Group of Five team in the CFP’s history.

“You can’t avoid the fact that strength of schedule is an issue when compared to the other teams,” Mullens said of UCF.

Iowa State also climbed six spots to No. 16 after its fifth straight win. Texas is No. 15 this week, up three spots.

But Washington was the biggest climber, coming in at No. 18 — up from No. 25 last week.

Some teams dropped after performances last week: Kentucky slipped from No. 11 to No. 17 after falling to unranked Tennessee, and Florida slipped two spots to No. 15 after a close win against South Carolina. Boston College is No. 20, three spots down from last week, following a 27-7 home loss to Clemson. Another SEC team slipped five spots: Mississippi State, down to No. 21 from No. 16 after a 24-0 shutout loss to the Crimson Tide on Saturday.

Utah is back in the rankings at No. 19 while Northwestern made its CFP debut this season as No. 22.

There was movement among Group of Five teams this week, with Boise State debuting at No. 25 after defeating Fresno State. The Mountain West conference also has representative Utah State at No. 23. And Cincinnati came in at No. 24 this week.

At this point, you’re probably wondering what the College Football Playoffs schedule could potentially look like.

While nothing has been confirmed—as there are still two weeks left in the season and even though the top 6 teams are VERY good, college football is extremely unpredictable—here’s what the bracket would look like today (via ESPN): And, unless something changes, this will be the schedule:

Who do you think will be playing in the National Championship?