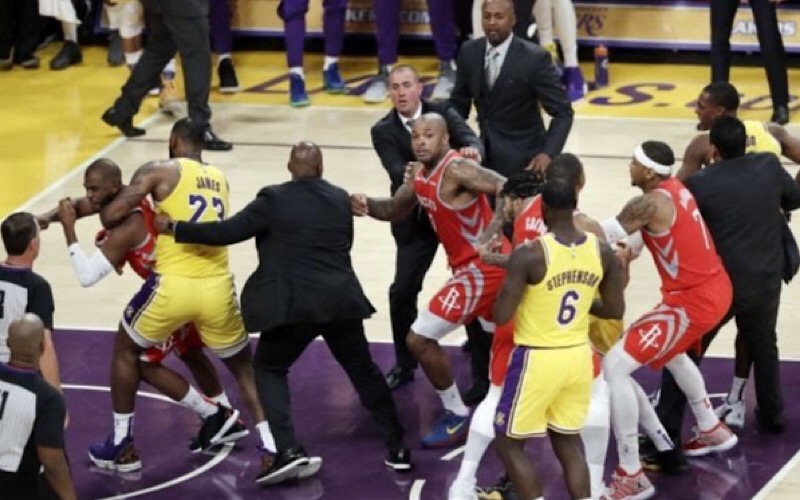 Though James’ first game as a Laker was supposed to be a big deal, it was overshadowed by a fight that broke out between Rockets player Chris Paul and Lakers player Rajon Rondo in the fourth quarter.

With just four minutes left in the game, Rockets guard James Harden drew a foul while driving to the hoop, making a layup over Lakers forward Brandon Ingram to put the Rockets up by 109-108.

Apparently Ingram, though, didn’t like the call and the 21-year-old quickly shoved Harden in the back, drawing a technical foul.

Lance Stephenson then ran in, grabbed Ingram and tried to walk him away from the situation in an attempt to deescalate it.

According to ESPN’s Rachel Nichols, Paul said the fight started between him and Rondo started because Rondo spit in his face. In a video she posted on Twitter, you can see Chris wiping his face before he goes after Rajon.

Chris Paul told our broadcast crew this all started because Rajon Rondo spit in his face. When the second replay cycles through you can see Chris wiping his face before he goes at Rondo. pic.twitter.com/2DxPjWdYCu

After officials reviewed the incident, Ingram, Paul and Rondo were all ejected from the game. and the trio will likely face suspensions and fines from the league as soon as Sunday.

The Rockets held on to their slight lead after the fight to take the 124-115 win, spoiling James’ opener in L.A. and getting their first win of the year.