GOSSIPONTHIS.COM Sports LeBron James Punched a Blackboard After Game 1 and Played the Rest... 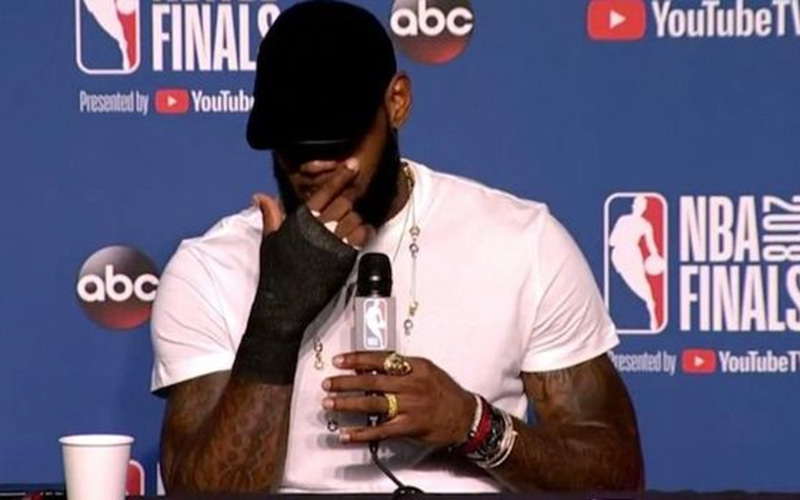 Despite LeBron James averaging 34 points, 10 assists and 8.5 rebounds while shooting 52 percent throughout the 2018 NBA Finals, the Cleveland Cavaliers did not win a single game against the Golden State Warriors. On Friday (Jun. 8), they were swept out of the Finals.

The one game that they had a chance to win, though, was Game 1. You remember that game right? The game where George Hill missed the game-winning free-throw and J.R. Smith grabbed the rebound only to commit the biggest blunder of his life, dribbling out the clock and forcing overtime. The Cavs wounded up with a devastating 124-114 loss, and tons of hilarious memes were created. This we know.

But we didn’t know, apparently, was that LeBron James threw a temper tantrum after the game and punched a blackboard in the locker room out of frustration, causing him to suffer a bone contusion in his right shooting hand.

ESPN’s Brian Windhorst and Sam Amick of USA Today tweeted that James played in the last three games of the Finals with the injury.

The injury was the product of frustration: He punched a white board after Game 1, I’m told. https://t.co/LQ03YbG7Fg

Amick said LeBron had an MRI after Game 1, but his hand was too swollen for doctors to see anything. “A second MRI was taken later that indicated it’s a bone contusion in the right hand. It is not expected to require surgery,” Amick tweeted.

LeBron had an MRI after Game 1, but the hand was too swollen for definitive results. A second MRI was taken later that indicated it’s a bone contusion in the right hand. It is not expected to require surgery.

Windhorst reiterated Amick’s report, saying that LeBron wasn’t using his injury as an excuse, but he chose to keep quiet “to prevent [the] Warriors from knowning.”

LeBron James suffered a significant right hand injury after Game 1 when he punched a black board in the locker room, sources told me & @mcten. He had 2 MRIs & has been wearing a soft cast. LeBron not using injury as an excuse but kept quiet to prevent Warriors from knowing.

During LeBron’s postgame press conference after Game 4, he commented on the injury, admitting that he’s basically been playing the last three games with a broken hand. He even had a cast on to prove it! He did not, however, confirm that he punched a board to cause the injury.

“What happened? Self-inflicted, post-game after Game 1. Very emotional, for a lot of different reasons. Understanding how important Game 1 is on the road for our ballclub, what would that have done for us. The way we played, the calls that was made throughout the course of that game, I had emotions on the game was taken away from us. I had emotions of you just don’t get opportunities like this on the road, versus Golden State, to be able to get a Game 1. And I let the emotions get the best of me. I pretty much played the last three games with a broken hand, so that’s what it is.”