GOSSIPONTHIS.COM College Sports President Obama’s Bracket Is Trash Because No. 16 UMBC Slaughtered No. 1... 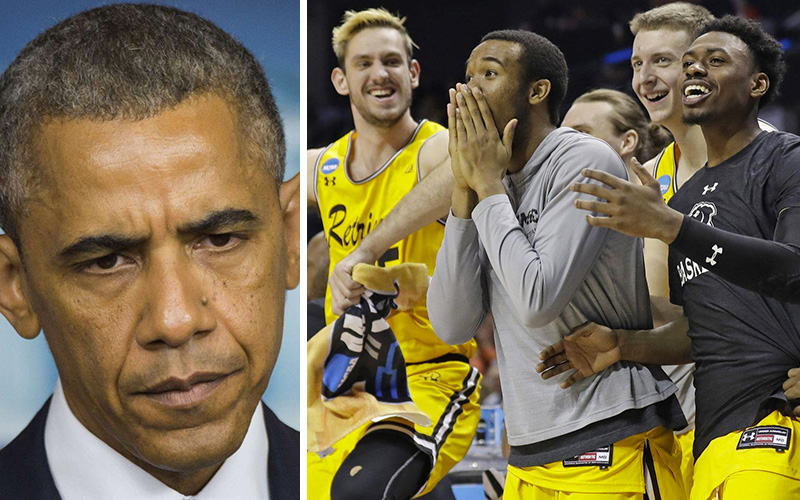 If you’re like former President Barack Obama (whose still my president because I refuse to claim 45) and you picked Virginia to win the 2018 NCAA Basketball Tournament, then you might as well throw the whole bracket away… because it’s as good as trash now. Before tonight, you may have never even heard of UMBC—which stands for University of Maryland Baltimore County—but, after Friday night’s (Mar. 16) historic upset against Virginia, you are now required to put some respeck on UMBC’s name.

PUT SOME RESPECK ON IT! WE HAVE DEFEATED NO.1 OVERALL SEED VIRGINIA 74-54

UMBC, a No. 16 seed, managed to pull off the biggest upset in the nearly 80-year history of the NCAA tournament, by not only defeating, but SLAUGHTERING No. 1 seed University of Virginia in the tourney’s first round, practically ruining 99.9% of everyone’s brackets.

Because Virginia was the No. 1 seed, most people probably chose them to win it all, or at least make it to the Sweet 16. So, them losing tonight’s game pretty much messes up EVERYONE’s brackets.

In fact, according to the NCAA, who’ve been tracking millions of brackets for this year’s championship, there are ZERO perfect brackets remaining.