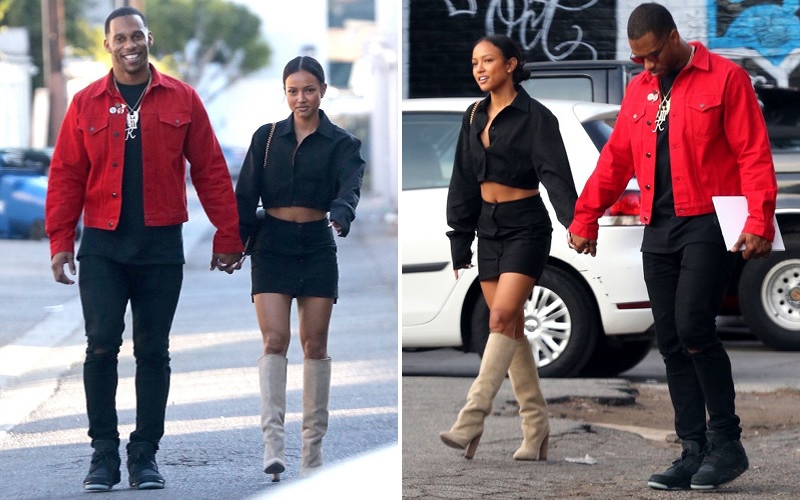 Rumored couple Karrueche Tran and Victor Cruz have finally been spotted out together. The two were caught holding hands while on their way to a lunch date in Los Angeles on Saturday (Dec. 16).

For about a month, it’s been speculated that the two were dating. But this is the first time the actress and NFL star have been photographed together (with PDA). A source tells Us Weekly the two aren’t exclusive, but they do want to see where their relationship goes.

“They are dating and have been for about a month now. They really like each other and are trying to make it work and see where it goes. They were and have been friends for a while and she was at his private birthday dinner in November. They aren’t exclusive yet, but it’s definitely in the works.” A separate source tells the magazine that Tran and Cruz have been hooking up “for a long time.” Unfortunately, their busy schedules have never allowed a relationship to grow. Now, Victor is not playing on a team this season and Tran has some free time.

“Victor and Karrueche have been hooking up for a long time. The timing was just never right and they were never in the same place at the same time. Now she has a lot more free time and for the time being so does he, so they are doing their best to make things work. She’s super into him and he’s head over heels for her. It’s adorable and she’s loving it.”

Tran was last linked to Quavo from Migos back in April. However, the fling didn’t last long. And of course, she had a tumultuous relationship with Chris Brown, who she attempted to file a permanent restraining order against earlier this year.

One of Us Weekly’s sources say Tran and Cruz will be spending New Year’s together. Let’s hope this new relationship is much healthier for the 29-year-old actress.