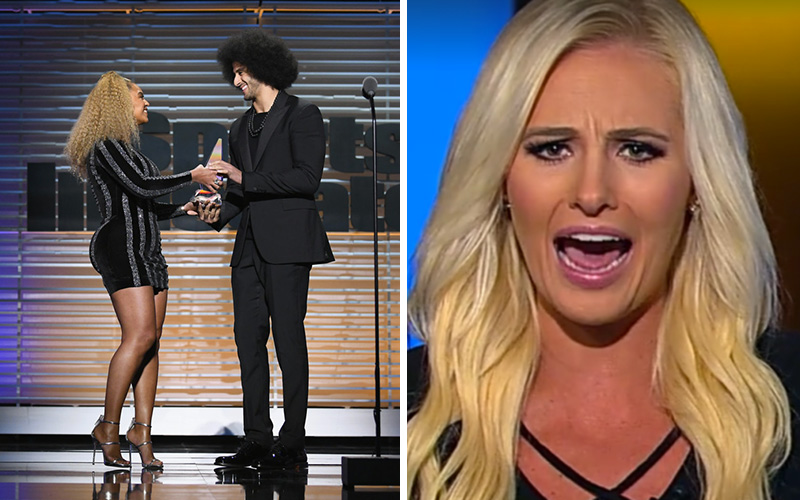 Activist and professional football player Colin Kaepernick was presented with the Sports Illustrated Muhammad Ali Legacy Award Tuesday night (Dec. 5) during the magazine’s 2017 Sportsperson of the Year show, and the person who presented him with the prestigious award was none other than superstar Beyoncé, whose appearance was a surprise to Kaepernick and everyone else.

Before presenting Kaepernick with the award, Beyoncé thanked him for his “selfless heart” in taking a knee against police brutality and system racism against black people, which sparked a national movement. Though Kaepernick is a talented quarterback, he remains unsigned by an NFL team more than a year after he began taking a knee during the playing of the national anthem before televised football games. “Colin took action with no fear of consequence or repercussion, only hope to change the world for the better; to change perception; to change the way we treat each other, especially people of color,” Beyoncé said. “We’re still waiting for the world to catch up.”

Queen Bey also addressed critics of the movement who claim that protesting during the anthem is disrespectful to the American flag and the military.

“It’s been said that racism is so American that when we protest racism, some assume we’re protesting America,” she said. “So let’s be very clear. Colin has always been very respectful of the individuals who selflessly serve and protect our country and our communities and our families. His message is solely focused on social injustice for historically disenfranchised people. Let’s not get that mistaken.”

Kapernick embodied Ali’s legacy by accepting the award like the true champ that he is.

Photos and video footage of the duo instantly went viral on social media, and within hours, Tomi Lahren found herself on the wrong side of a well-deserved Twitter dragging after making a bold attempt at coming for the Queen and Kaepernick.

“Police-hating Beyoncé presents police and America-hating Kappy with a ‘legacy’ award,” she wrote on Twitter along with a photo of the pair. “This is how far we’ve fallen. Wow.”

Police-hating Beyoncé presents police and America-hating Kappy with a “legacy” award. This is how far we’ve fallen. Wow. pic.twitter.com/KIe6IqEQey

Mind you, this is NOT Lahren’s first time coming for either Beyoncé or Colin Kaepernick; she has criticized the former over everything from her politics to her Super Bowl performance, and she’s used her “platform” to slam the latter on more than one occasion.

Not surprisingly, Lahren was dragged to hell and back by the BeyHive on Twitter for her latest attack.

The Beyoncé jealousy is real. ? Perhaps because she is a beautiful, successful, talented woman and isn't on her parent's insurance?

YOU are an example of how far we’ve fallen.

Wow… practicing your freedom of speech is “America Hating” to u while regulating firearms which kills thousands on Americans each year is not ! Never understood your logic @TomiLahren

Hope solange catches u in the elevator ?????RT @TomiLahren: Police-hating Beyoncé presents police and America-hating Kappy with a “legacy” award. This is how far we’ve fallen. Wow. pic.twitter.com/l1wzj8rj17

@TomiLahren think of all Beyoncé’s achievements and then remember you’re still on your parents insurance #bloop pic.twitter.com/l7Ut4w6pbs

I feel like @TomiLahren needs to stfu and stop talking about our queen @Beyonce cause every time she do we always dragging her for the mess cause she is full of ? and always bringing ppl down base off her low self esteem

Good to see you're drinking all of the #FauxNews Kool-aid these days. Beyonce & Kaepernick have been very clear that they respect the police. What they protest is the continued racial inequality & unjustified homicides of black men and women at the hands of too many officers.

Girl YOU are the problem. When did Beyoncé say she hated the police??? And when did Kap say he hated America? What I see is two beautiful and courageous people who are standing up to the injustices in America!!!!!

Why is this non top lip having bitch @TomiLahren mad @ Beyoncé?

In the words of Beyoncé’s good friend Nicki Minaj, “Watch your man, then you should watch your mouth! Bitches is pressed, administer mouth to mouth!”