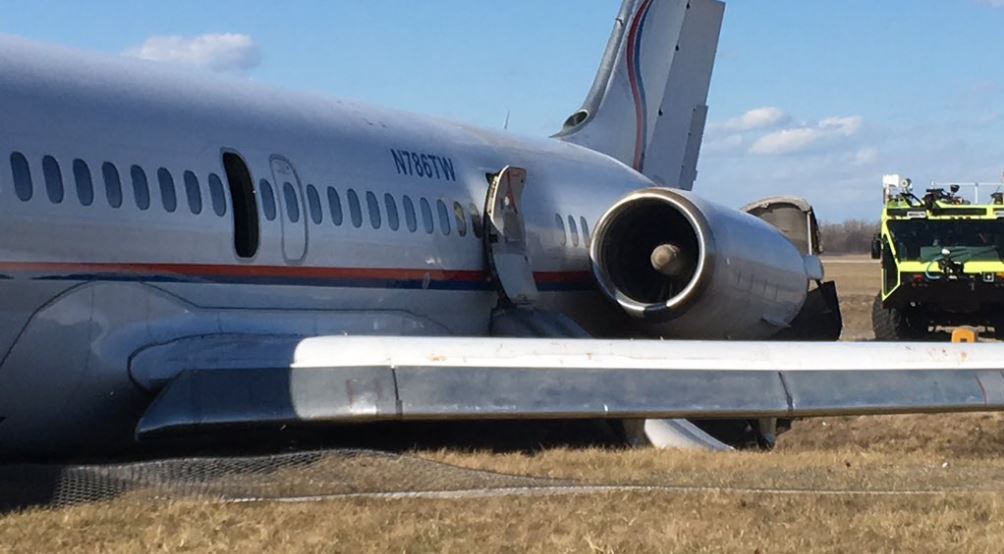 While traveling to Washington to kick off the second round of the Big Ten Tournament against Illinois Wednesday (Mar. 8), the Michigan team plane aborted takeoff due to high winds and skidded off the runway. The plane suffered “extensive damage,” but luckily none of the 109 passengers or crew were seriously injured.

Scariest moment of my life but we're all good. #GoBlue pic.twitter.com/3GGd2Rw5no

After the plane slid off of the runway, everyone was forced to evacuate, according to team spokesman Tom Wywrot:

“Without hesitation, the staff on that plane and the people – our staff, our players – on the plane knew what to do, got off the plane fast and ran. I’m very thankful and very happy for that. People were helping each other and nobody blinked. The emergency doors were taken off and we all got out. People had to get on the wings.”

Coach Beilein stood on the ground near the smoking plane engines and assisted people coming off an emergency slide.

Scary attempt to get to DC but everyone is alright pic.twitter.com/gC4nJBxUDw

That was crazy,glad everyone is ok! Coach B's leadership was great, he helped everyone off the plane as they slid down the emergency slide. pic.twitter.com/sDWz6DWEoE

“All OK! A few guys a little banged up and shook up. Blessed we did not get up in the air,” Michigan coach John Beilein texted ESPN’s Andy Katz.

Many of the students aboard — which consisted of the basketball team, the cheerleading team, band members and members of the coaching staff’s families — reached out to family members after the ordeal.

Erica Myrick, a cheerleader, called her father Richard Myrick. “They were on their way to D.C. at Willow Run, and apparently, right after the pilot brought the wheels of the plane off the ground, the wheels came back down and they crashed through a number of gates,” he said.

“It puts so much in perspective right now,” Beilein told WXYZ-TV.

"We have a few people banged up a little bit, a few cuts, few bruises, but other than that, everybody's healthy." – Michigan's John Beilein pic.twitter.com/1nw87EtOQ9

As of now, the game between Michigan and Illinois is still scheduled for noon on Thursday (Mar. 9). But according to Michigan Basketball’s Twitter, they continue to look at travel options to reach the game on time.

PM update: we continue to look at travel options ahead of our Big Ten tournament game tomorrow. Thanks again for the incredible support! ?