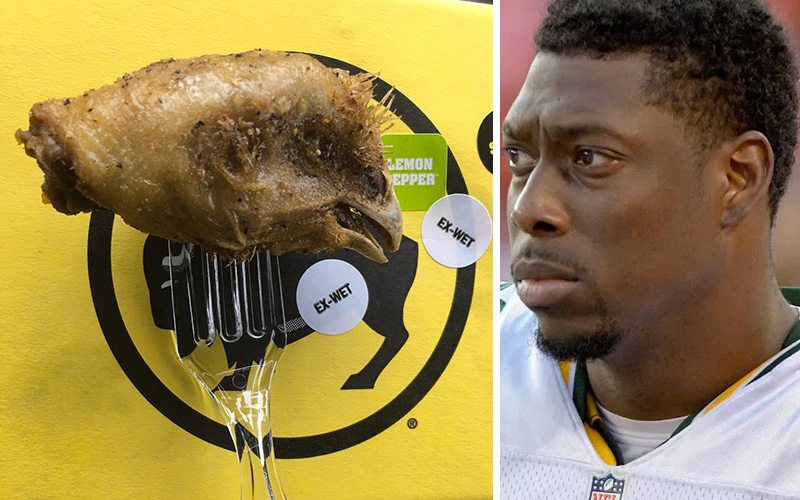 There are few things that go together better than football and chicken wings. It’s just about as American as it gets. So imagine the surprise (see: disgust) when the Packers’ tight, Jared Cook, end went for a nice meal at a B-Dubs and got this.

This happened Tuesday when I went to eat @BWWings How Sway? How? ? pic.twitter.com/8T8aSaKrZ7

I don’t even have the words. WT actual F? That may be chicken, but it certainly isn’t a wing. According to Cook, the chicken “wing” had “tongue, eyes, and beak all present. With extra seasoning.”

Look, it doesn’t matter how much seasoning you put on that thing, that just ain’t acceptable. When he raised the issue with an employee at Wild Wings, he was told, “sorry, unfortunately this happens because the chicken is fresh.” That happens? Like, he’s acting as if this isn’t the first time this has happened. After being informed of the matter, a rep for the restaurant said, “Buffalo Wild Wings takes food preparation, service, and quality extremely seriously and we are looking into this situation. We’ve reached out to Jared Cook and our suppliers for more information.”

So be wary, everybody. When you’re biting into those chicken wings this weekend, make sure it doesn’t have a beak.