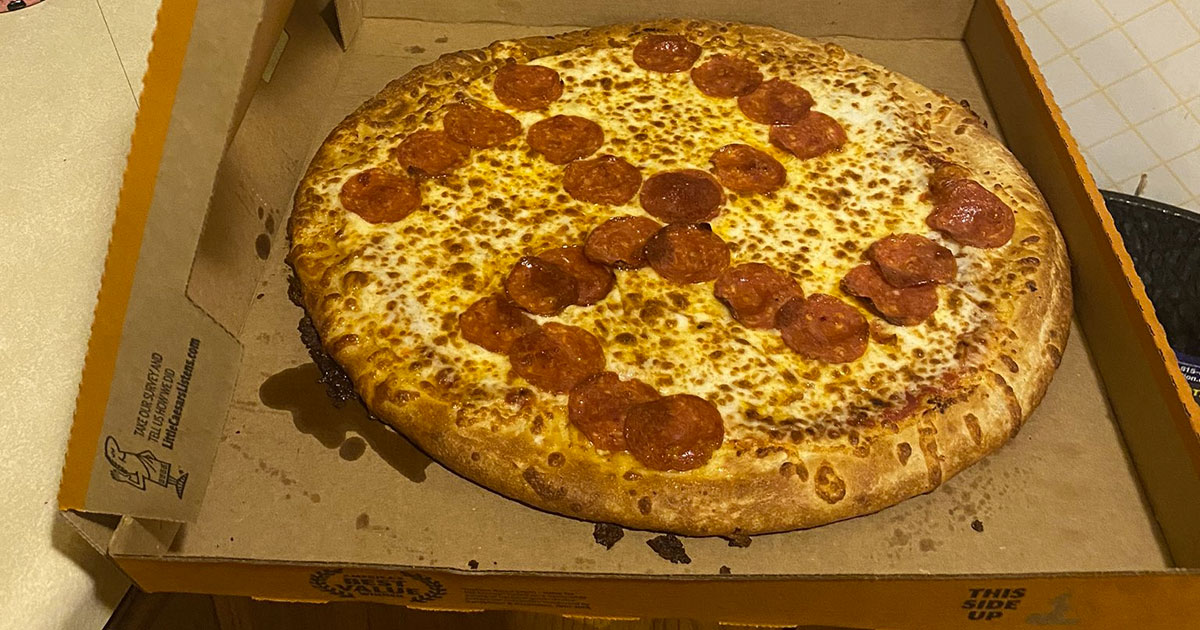 A pair of Little Caesars employees were fired for preparing a pizza with a swastika made out of pepperoni and “accidentally” giving it to a customer.

According to WJW-TV, Jason Laska stopped by a Little Caesars in Brook, Park Ohio (just outside of Cleveland) on Saturday (Jun. 27) to pick up dinner for his family.

When he got home, his wife Misty opened up the box and saw the symbol, which was popularized by the German Nazi Party in the 1930s.

“She turned and asked me ‘Babe, did you order this, did they make it for you?’ And I turned around and looked at it and I could see the shock on her face and then my jaw just dropped,” Jason told the local news station.

Jason told CNN his wife thought an employee gave him the pizza “on purpose thinking they were targeting me because they stereotyped me or something.”

However, the pizza was pre-made … Jason said he grabbed it from the “hot and ready pizza” warmer.

“I was like they didn’t cut our pizza, but then I stepped back for a second and I saw the symbol. And I looked at him and I was like ‘Hold on, did you have to order fresh pizza or something?'” Misty said.

The Laskas didn’t eat the pizza so that they could keep it as proof, but when they called the store to complain, it was already closed.

“That’s when we posted to social media, wanting to express our anger and show our family and friends what kind of place it was,” the couple told CNN.

Misty shared a photo of the pizza on Twitter, writing: “So my husband stopped at #LittleCaesars for a quick bite, husband brings this home! I’m truly disappointed. This is truly saddening and disturbing and not funny at all! These aren’t funny jokes and shouldn’t be made period and on company time?!”

So my husband stopped at #LittleCaesars for a quick bite, husband brings this home! I’m truly disappointed. This is truly saddening and disturbing and not funny at all! These aren’t funny jokes and shouldn’t be made period and on company time?! ???????????? pic.twitter.com/zQaXecN2se

The next day, Jason and Misty received a call from the store manager.

“[The employees] told him that it was supposed to be an internal joke that they were playing on each other and the other employee, and the pizza was never intended to go out,” Jason revealed told WJW-TV.

Little Caesars said in a statement on Monday (Jun 29): “We have zero tolerance for racism and discrimination in any form, and these franchise store employees were immediately terminated. We’re deeply disappointed that this happened, as this conduct is completely against our values.”

Jason and Misty said they were frequent customers of that particular Little Caesars location because it’s close to their house … but after this incident, they said they’ll never set foot in a little Caesars restaurant ever again.

“It’s unacceptable and in our minds, we are just never going to go back there,” Jason explained.

“We are the type of people that support the diversity in our country, we embrace and love it. We just want to see this hate stop,” Misty added.

Jason also said to CNN: “This is an example of what needs to change in our world. And we hope that people start to realize that and use their time to make those changes and not blast us for trying to do it.”