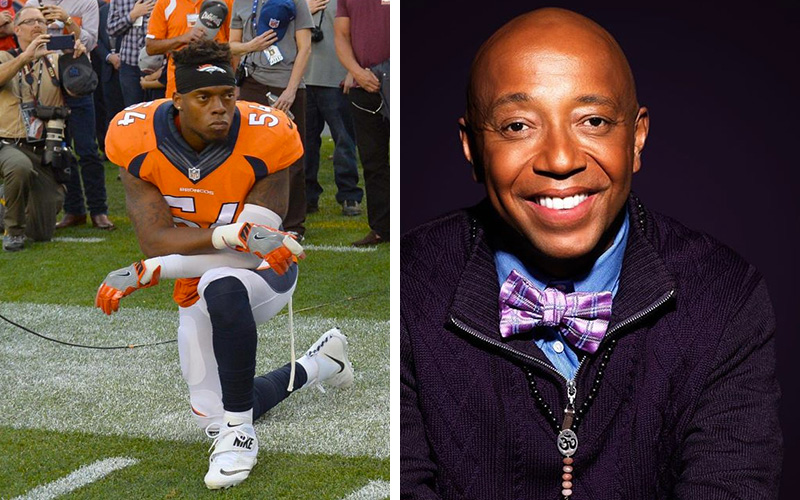 Colin Kaepernick’s protest has now taken on a life of its own, with athletes across various cities and sports now participating in one way or another. And while the country still seems to be divided as to how they feel about it, it hasn’t kept players like Brandon Marshall from stepping up (or, rather, sitting down) in joining Kaepernick.

Before the first game of the NFL season, Denver Broncos linebacker Brandon Marshall took a knee during the National Anthem along the sidelines. Unsurprisingly, this did not go over very well in the very conservative city of Denver.

The act has lost Marshall not one, but two separate endorsement deals with Air Academy Federal Credit Union and CenturyLink.

“I just lost another endorsement,” Marshall said. “But it’s not going to make me lose any sleep…I understand there will be things that come up, criticism, and support. I just have to do what I think is right.”

Well, the support part of Marshall’s statement came today when Russell Simmons announced he will be endorsing Marshall with RushCard.

Simmons, who is an activist fighting for equal treatment himself, called Marshall a “great American hero.”

“I am grateful for his and other athletes’ courage in standing up against injustice,” he wrote when discussing the endorsement.

And Simmons’ company isn’t the only one backing Marshall. Yesterday, PG Sports announced they will also be endorsing him.

We are officially offering @BMarshh54 an endorsement deal! We'd love to have him on the #PGSportsTeam

Who knows how long the National Anthem protest will go on, or how long people will continue talking about it. Regardless, it’s great to see athletes fighting for what they believe in, and it’s even better when they back up those actions.

Marshall has already said he will be donating money to help fight for better treatment of minorities in this country, so perhaps some of his new endorsement money will be put to good use.