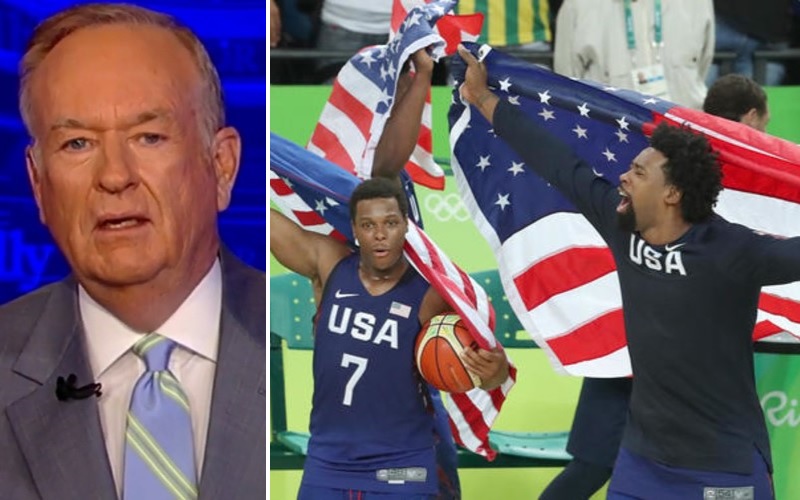 The 2016 Rio Olympics have concluded and the United States not only took home the most medals overall (121), but also the most gold medals (46). That means the National Anthem was heard 46 times while American athletes stood at attention with pride for country and their personal achievements. Great moments for all American citizens, really.

For FOX News pundit, Bill O’Reilly, however, the best moment of the Games was when a particular group of black men won gold and had “hands on their hearts.” This moment occurred when the USA men’s basketball team won its third consecutive Olympic gold medal.

“The best image for me was the sight of the American basketball team carrying our flags after winning the gold medal. The team was all minority players showing pride in their country,” O’Reilly began. “When the national anthem was played, the guys had their hands on their hearts, no cheap shots at the country that had afforded them the opportunities to succeed at the highest level,” he continued as if had had just seen a herd of magical unicorns that we all thought only existed in fairytales.

So, forget about all of the talent, hard work, and dedication these guys had to put it to make it there. Carmelo Anthony, Kevin Durant, and the rest of the team owe their medal to America for all of the “opportunities” the country has afforded to them. I guess since they haven’t been shot by the police or failed by the justice system, they were allowed to play some basketball “for the country.”

Although I’ve included the video, here’s the rest of the ridiculousness O’Reilly spewed on his program:

“If you believe the far left, we are a bigoted country that actively seeks to destroy young black men. The crazy left also puts out that we want to persecute innocent immigrants, that our economic system is rigged to help the wealthy, that our social system intentionally punishes the poor.

“All lies. But they are spread by politicians and dishonest media who actively despise their own country. Talking Points has expounded on Black Lives Matter. There is no need to do that again here, other than to say the leadership of that organization hates America.”

I’m not sure exactly how the Black Lives Matter movement fits into this equation or why he decided to make the USA Men’s Basketball team’s victory political, but his statement is problematic on so many levels.

Apparently, simply calling out injustices within America and highlighting areas that need improvement means you hate the country. And he basically bullet-pointed all of Republican Nominee Donald Trump’s so-called polices/platform when he condemned the claims of the “far left.”

I don’t even know how O’Reilly and other FOX News personalities fix their mouths to say some of things they do. However, I shouldn’t be surprised at this point. It’s just a shame the ultra-conservative cable news channel has so much influence and a loyal, yet misguided, audience.

Just to make O’Reilly’s blood boil a little bit, here’s a photo Team USA he must not have seen!