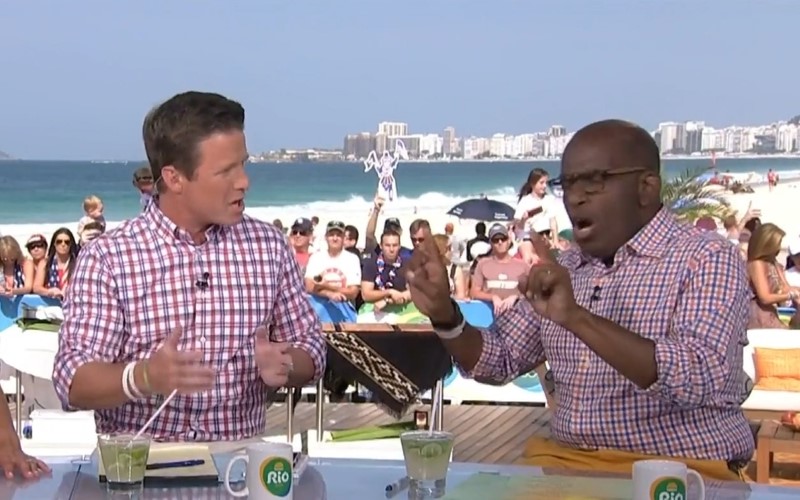 For like the next two days, Al Roker will be my hero and I’m going to tell you why! America’s “favorite weatherman” was completely fed up with white male privilege while discussing all the lies Olympic swimmer Ryan Lochte has told.

Roker and entertainment anchor Billy Bush got into a rather heated debate on the Today show Saturday morning (Aug. 20) while discussing the topic that has virtually overshadowed the Olympics for the past few days.

“He lied,” Roker said to Bush. “He lied to you, he lied to Matt Lauer, he lied to his mom… He left his teammates hanging while he skedaddled. There was no robbery, there was no pull over. He lied.”

Despite all the true facts we now know regarding Lochte’s tales, Bush, however, attempted to defend the lying Olympian. Bush used words like “embellished” and “untruths,” basically saying anything to avoid calling a spade a spade. But given that he’s related to the Bush political dynasty, what more can we expect from him?

Here comes my hero Roker! He wasn’t having Bush’s apologists tone and said everything we at home were screaming to the TV. Thanks to sound effects provided by Café.com, the epic moment has gone viral.

Lochte, of course, was caught in a lie after he claimed he and three other US swimmers were robbed and held at gunpoint. Rio police, as well as two of the swimmers involved, have confirmed that this was not true. The swimmers were actually drunk and vandalized a gas station. They were then confronted by security guards due to their disorderly conduct.

It’s been reported that Rio may still file charges against the foursome for reporting a false crime. Lochte has since apologized and will reportedly sit down with Matt Lauer for an exclusive interview on Monday.

Many, like Bush, have given Lochte the benefit of the doubt because of, you know, white male privilege, and even deemed the 32-year-old a “rowdy kid having fun.” (Meanwhile 12-year-old Tamir Rice was a “threat,” but I digress).

I’m just thankful Roker was there to call out Bush’s “untruths.”