GOSSIPONTHIS.COM Sports The Hate is Real For Kevin Durant Following His Move to the... 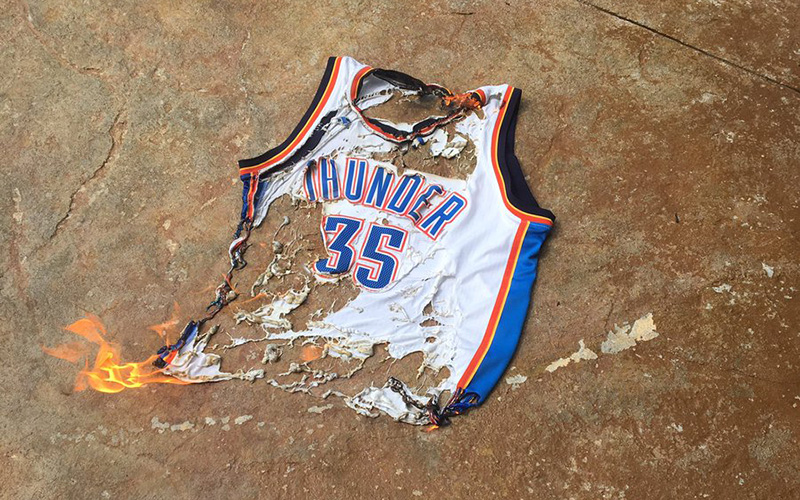 Kevin Durant has widely been recognized as one of the most likable players in the NBA since joining back in 2007, and understandably so. He’s a great player who has never found himself in any drama on or off the court — really, everything a team could ask for in their superstar.

Well, this week, Durant’s title of most likable player has come crashing down with his announcement that he will be joining the Warriors next season. Mere hours after his decision — granted, a much less over-the-top one than LeBron James’ years ago — the internet was awash with memes, videos, and posts bashing the former MVP.

Shortly after finding out, many Thunder fans took a note from Cavaliers fans who, after hearing LeBron was going to Miami, set his jersey ablaze.

I wish Durant would have stuck around like the plastic this jersey was made out of pic.twitter.com/jhl7iLuy4e

And it didn’t take long for the memes and mocking videos to come out, either. Kevin Durant finding a new teammate to blow a 3-1 lead with. #Warriors pic.twitter.com/k4sxOfuvYL

It wasn’t just fans online who took part in the discussion, however. Professional sportscaster Stephen A. Smith delivered one of his patented rants, saying, “I’m viewing it as the weakest move I’ve ever seen from a superstar, plain and simple.”

Left in the middle of this Fourth of July hubbub is Thunder point guard Russell Westbrook. Westbrook, a star in his own right, now has the opportunity to make the team his own, and the internet didn’t want to leave him out of the festivities today.

From now on, July 4th will be recognized as Russell Westbrook's Independence Day pic.twitter.com/RYmdsn8E8a

A lot of people love the move by Durant today (see: Warriors fans), but a move of this caliber is obviously going to be divisive in the sports world. Regardless of how you feel, one thing is for sure: the Warriors are going to be unbeatable in NBA 2K17.