GOSSIPONTHIS.COM Celebs Jay Z Invites 12-Year-Old Boy On Stage to Rap with Him During... 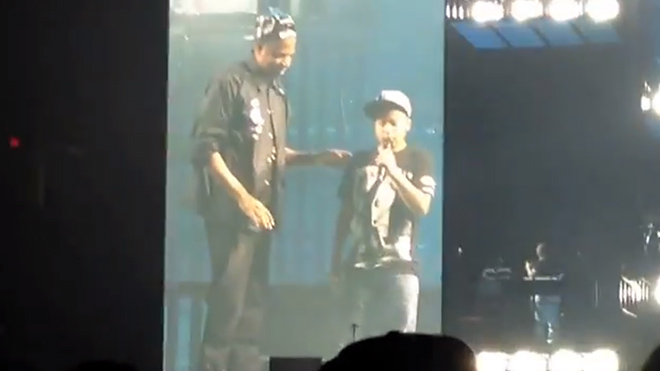 Jay Z gave a 12 year-old boy the chance of a lifetime at his recent concert in Greensboro, NC this past weekend.

The 12 year-old boy named Justin and his mother held up signs saying “Can I rap for you?” at two different “Magna Carter World Tour” shows — one in Charlotte and the other in Greensboro. But it was Sunday night’s show in Greensboro that finally caught Hov’s attention.

In front of an arena full of people, Jay invited Justin on stage to rap his verse from “Clique.”

Jay Z, who we all know has been showing his parental side more often lately (thanks to the arrival his now 2-year-old daughter Blue Ivy), didn’t allow the young boy to rap any curse words or “the drug dealing part” of the song, however.

After the young fan performed, Jay made his final request come true by bringing him backstage to hang out.

WATCH THE VIDEO ABOVE