So much for good sportsmanship.

On Monday night, the 100m womens’ hurdles proved to be a nail-biting, record-breaking event. With three Americans in the running — Dawn Harper, Kellie Wells and media darling Lolo Jones — there was a good chance that the USA was going to walk away with at least one medal.

Unfortunately, it wasn’t the chosen one, Lolo Jones.

While Dawn and Kellie were gracious to the gold medal winner, Australian hurdler Sally Pearson, they brought the claws out for their fellow American Lolo Jones.

In an on-air interview with NBC, Dawn Harper didn’t pull punches on the fact that she felt overlooked, while much of the media went chasing after Lolo Jones.

We hate to bring up the light skin/dark skin argument, but you can’t help but feel a bit of this dynamic as Harper bitterly complains about the attention paid to Jones. Wells agreed.

Here were Harper and Wells’ exact words via SB Nation:

Harper: I feel I had a pretty good story — knee surgery two months before Olympic trials in 2008, to make the team but 0.007, not have a contract … working three jobs, living in a frat house, trying to make it work.

Coming off running in someone else’s shoes getting the gold medal. I’d say I was pretty interesting. I just felt as if I worked really hard to represent my country in the best way possible, and to come way with the gold medal, and to honestly seem as if, because their favorite [CLOSE UP ON LOLO JONES FROM TUESDAY NIGHT] didn’t win all of a sudden it’s just like, ‘We’re going to push your story aside, and still gonna push this one.’

That hurt. It did. It hurt my feelings. But I feel as if I showed I can deal with the pressure, I came back, and I think you kinda got to respect it a little bit now.

Beadle [to Harper and Kellie Wells]: You guys kinda hang out together … Is there fighting amongst the team — we’re talking about Lolo Jones if you can’t figure this out — is there an awkward situation or now that it’s over we’ve all just moved on?

Wells: Well, I think that, on the podium tonight, the three girls that earned their spot and they got their medals and they worked hard and did what they needed to do, prevailed. And that’s all that really needs to be said.

Beadle: You can cut the tension in here with a knife.

The only appropriate gif for that triple-layer cake of shade is this:

Meanwhile, while Harper and Wells were busy digging a ditch for Lolo to fall into, Jones was on the Today Show getting all flustered and teary eyed about the meanies in the news media. Particularly, a New York Times piece that dubbed her the Anna Kournikova of hurdles, meaning she’s all looks but no performance. Ouch.

Were Wells and Harper too hard on lil’ Lolo or does Lolo deserve the backlash she’s getting? Isn’t losing punishment enough? 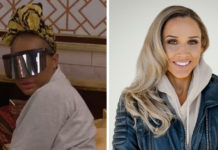 Did Lolo Jones Get Kicked Out of the “Celebrity Big Brother” House for Slapping Tamar Braxton’s Glasses Off Her Face?