It was a rematch of the 2008 NFL championship, when Manning led New York past New England to ruin the Patriots’ bid for a perfect season.

This was the first Super Bowl with two starting quarterbacks who previously won the big game’s MVP award — and they took turns being brilliant. Manning became the first QB to open a Super Bowl with nine consecutive completions. Later, Brady put together a run of 16 completions in a row, breaking another Super Bowl mark.

But in the end, it was Manning who directed the nine-play, 88-yard drive that put New York ahead. One of the game’s highlights and funniest moments was when Giants running back Ahmad Bradshaw (#44) “accidentally” scored a touchdown with just 57 seconds left on the clock by basically sitting down in the end-zone. Hilarious!

It should also be noted that Giants Quarterback Eli Manning (#10) was the recipient of the prestigious Vince Lombardi MVP Trophy.

Congrats to the Giants on their big win!

Who were you rooting for? Did your favorite team win? 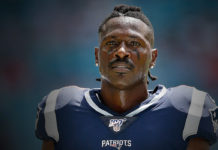 Antonio Brown Dropped From the Patriots Amid Multiple Rape Allegations