Manny “Pacman” Pacquiao has stepped up to Floyd Mayweather‘s challenge, saying that he is willing to fight the undefeated boxer this May!

Mayweather recently used his Twitter account to call Pacquiao out, telling the Filipino boxer to “Step up Punk.”

“Manny Pacquiao I’m calling you out, let’s fight May 5th and give the world what they want to see,” Mayweather tweeted. “My Jail Sentence was pushed back because the date was locked in. Step up Punk.”

According to ABS-CBN, Pacquiao’s advisor Michael Koncz said that the fighting congressman with go head-to-head with his famous rival “Money Mayweather” at the end of May, instead of May 5th.

“Be your own boss Floyd and fight at the end of May, for the economic reason of earning the extra income from the bigger stadium… the earliest this can be constructed is the end of May,” Koncz said in a text message to an ABS-CBN reporter.

Pacquiao himself confirmed through a separate text message that he is willing to fight Mayweather at the end of May.

The “bigger stadium” that Koncz referred to is an outdoor stadium that can seat 45,000 to 50,000 people. Top Rank chief executive Bob Arum said in a previous interview that holding the fight at the temporary stadium will mean a difference of around $40 million.

If the Pacquiao-Mayweather mega-fight is held on May 5, it will most likely be held at the MGM Grand Garden Arena, which seats around 16,500 people.

“In order to maximize revenue for the fight, you have to have a stadium larger than 16,500,” Arum said. “The (temporary stadium) wouldn’t be ready with any degree of certainty in the beginning of May. It would be available at the end of May.”

“If we do it on May 5, we would be limited pretty much to the MGM Grand, and we would probably do a gate of $20 million, a record gate. If we did it in this new temporary arena for 45,000 people, we would do a gate of around $60 million.”

“The difference is a minimum of $40 million. It’s an extra $20 million for each fighter… That’s still a lot of money,” Arum said. — Report from Dyan Castillejo, ABS-CBN News.

Of course Floyd would have to get “permission” from the judge presiding over his case before he commits to anything, but it looks like the fight is on! 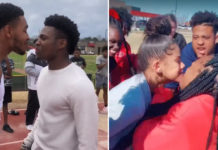 Get Yo Kids: Teens Are Kissing & Touching Each Other’s Faces to Do Fruit Roll-Up Challenge Amid Coronavirus Scare