Congratulations are definitely in order for New Orleans Saints football player Drew Brees, who last night broke the official NFL record for yards passed in one single season, a record that was set by NFL legend Dan Marino back in 1984.

Brees entered the game with 4,780 yards, needing 305 to set the record. He has passed for 300 yards or more an NFL-record 12 times this season – with one game still to play.

Brees threatened Marino’s record once before in 2008, when he finished with 5,069 yards, making him and Marino the only quarterbacks to pass for 5,000.

Congrats Drew! This is definitely a pretty big deal…

Look below for video footage of Drew thanking his teammates and the New Orleans Saints organization: 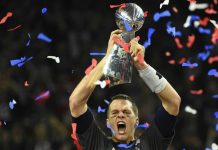