GOSSIPONTHIS.COM Celebs Gabourey Sidibe Speaks on Chris Rock Grabbing Her Behind: “It’s my own...
245
SHARES
ShareTweet It seems that comedian Chris Rock might have gotten his azz handed to him (no pun intended) backstage at the 2010 NAACP Image Awards last week. As actress Gabourey Sidibe made her way to the stage to accept her award for “Best Actress” from Chris Rock, he grabbed her butt with both hands; she playfully slapped him off and laughed, but apparently, her father, who was in the audience, wasn’t laughing.

“As I go up to get my award in a room where my dad is, because he’s one of my dates, Chris Rock grabbed my butt with both of his hands – and then I slapped him back. I didn’t think too much of it at all, but my dad was super pissed.”

“Some dudes gotta have it – it’s my own fault for being too damn fine.”

LOL! We love this girl and her self-confidence. The first time actress is nominated for an Academy Award for her starring role in “Precious.” 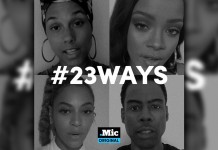 Alicia Keys, Beyoncé, Rihanna and More Describe “23 Ways You Could Be Killed If You Are Black in America”