GOSSIPONTHIS.COM Viral Videos Mom of 5 Flips Car with Her Kids Inside in Alleged Suicide... 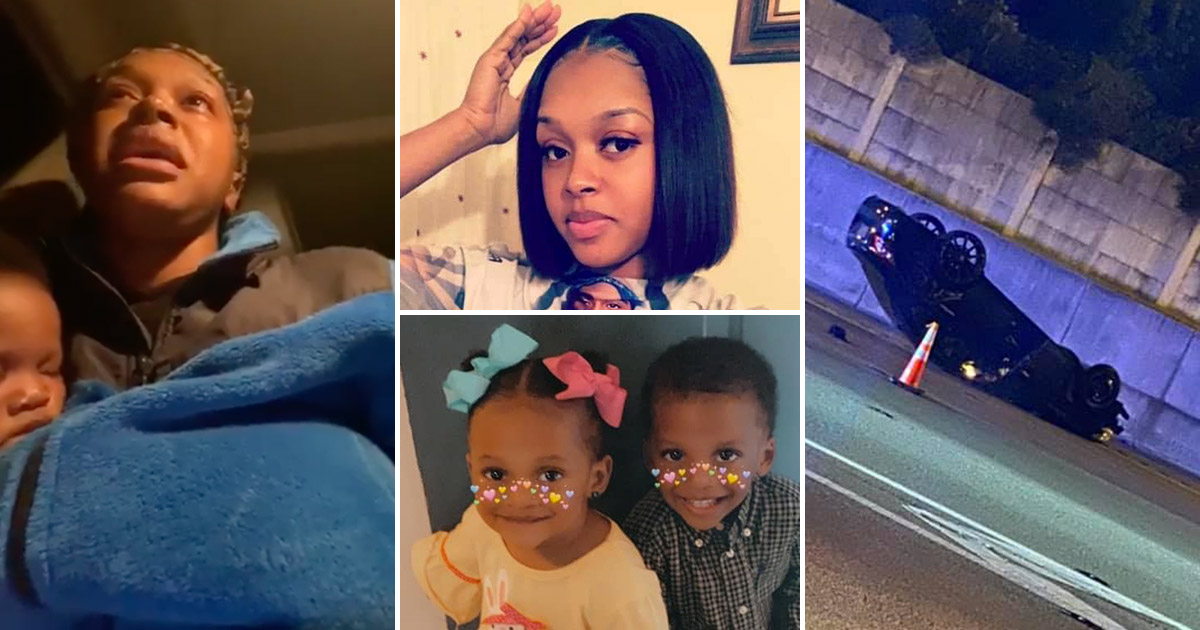 A Mississippi mother of five has gone viral on social media for all the wrong reasons after she went on Facebook Live and talked about committing suicide with her kids after finding out her boyfriend is married.

Late Thursday night (Jun. 25), Itasha Brunson of Holly Springs, MS went Live on her Facebook page to say her final goodbyes while driving and holding her infant daughter in her arms.

During the 20-minute live stream, Brunson said she planned to commit suicide by driving in traffic and could be heard complaining about there not being enough cars on the road so that she could complete her act.

She insinuated that she initially planned to take just her own life, knowing that her mother would take good care of her children once she was gone, but she changed her mind and decided to involve her two young daughters because she wanted someone to “come with” her.

Brunson, who cried throughout the video, said the reason why she planned on ending her life and taking her baby girls with her was that she had recently found out the man she’d been dating was married.

It’s being said on social media that the infant child she was holding in the video belonged to the married boyfriend, though that information has not been confirmed.

“I just want this to happen fast,” Itasha said in the video. “Because Glenn Jamerson Jones knew I loved him. All he had to do was keep it real with me. He never told me that he was married … it hurts so bad.”

Near the end of the video, Itasha said that she’d told her mom goodbye and left her sons with her, but not her daughters because “you can’t trust everybody with your girls.” She said: “I hate to take my baby girls’ life, but I don’t wanna leave them with nobody.”

After the live stream ended, Brunson was involved in a multi-car accident on I-240 near Perkins Road in Memphis, which is about an hour away from Holly Springs, Mississippi.

Memphis police said someone called to report a multi-car crash with an overturned vehicle.

According to Fox13 Memphis, two children and one adult were taken to the hospital. One of the children was initially said to be in critical condition, however, police said “all parties are now non-critical,” per Fox13.

Prelim Info: Callers reported a multi-car accident, one of which is overturned. Two juveniles and one adult were transported. One of the children was critical, but now all parties are listed as non-critical.

While in the hospital, Brunson went on Facebook Live once again and explained that she never intended to actually commit suicide with her children, she just wanted attention.

Brunson said she dropped her phone and looked down to reach for it. When she looked back up, there was a car in front of her, and when she tried to avoid crashing into the car, she lost control of her vehicle, hit a guardrail and flipped “multiple times.” She said her 2-year-old daughter was ejected from the vehicle.

She reiterated her story on Facebook, writing: “Y’all judging me off the hurt me … y’all don’t know my story … a hurt person will say anything … I was just hurting last night … I didn’t mean to do that … my phone dropped n when I went to reach for it while going live n lost control of the car…”

She added in another post: “I’m okay everybody n my girls are stable just pray … I didn’t mean for this to happen like this I was going live for Glen attention n didn’t know he was home sleep n I dropped the phone n went to reach for it n lost control of my car … I wouldn’t dare hurt them girl[s] n everbody know me I wouldn’t I love kids.” 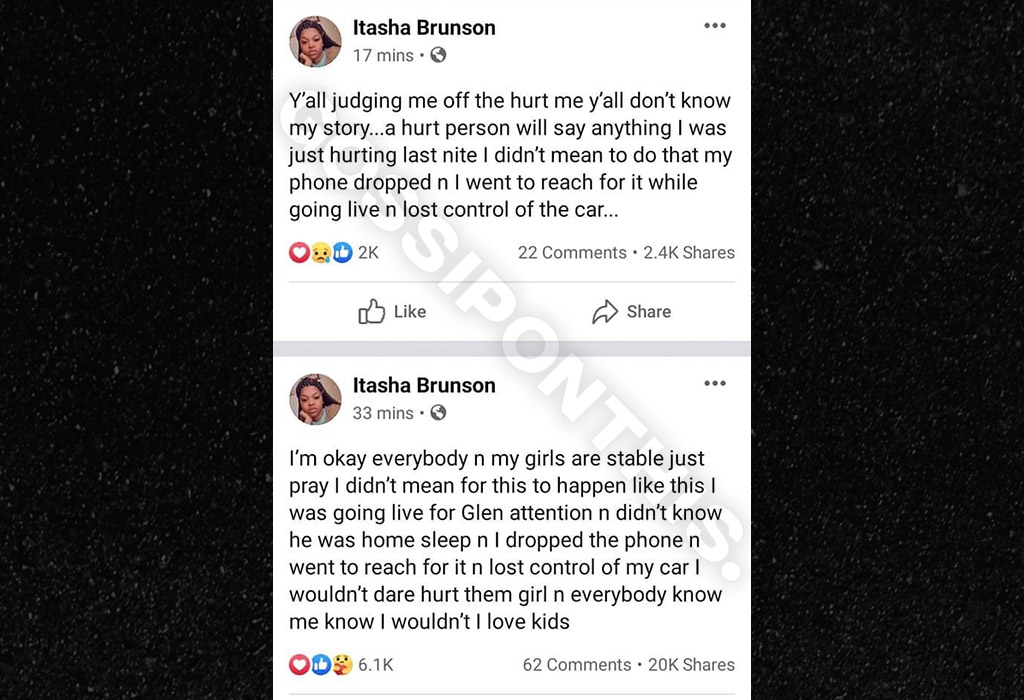