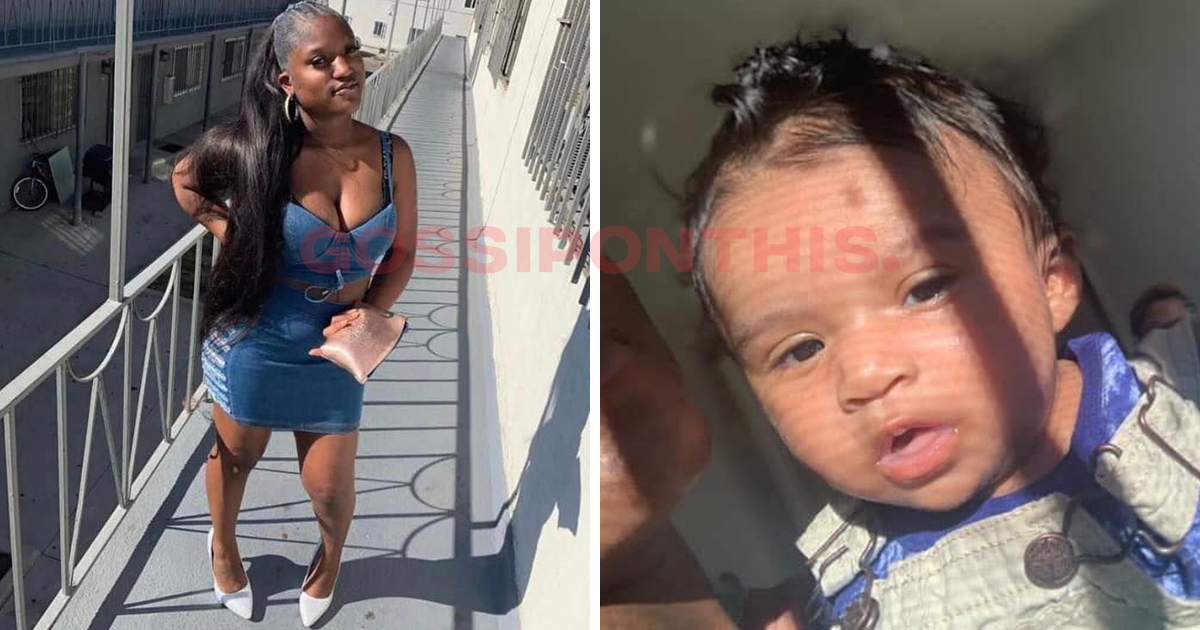 23-year-old Asherey Ryan, her unborn baby boy Armani, her 11-month-old son Alonzo, and her fiancé Reynold Lester have been identified as four of the six victims who were killed Thursday (Aug. 4) in the fiery L.A. crash that has been making headlines all weekend.  The additional two victims—described as two women by the coroner’s office—have not yet been publicly identified.

Also identified was the driver who caused the deadly crash—37-year-old Nicole Loraine Linton. She was injured in the crash as well and was arrested while recovering at the hospital. Police say she will be formally charged Monday.

Here’s what you need to know about Asherey Ryan, her family and the tragic car crash that claimed their lives:

1Asherey Ryan was 8 months pregnant and on the way to a doctor’s appointment with her family at the time of the crash.

Asherey Ryan pictured here with her fiancé Reynold Lester who was also killed in the crash.

According to the California Highway Patrol, shortly after 1:30 p.m. Thursday afternoon (Aug. 4), a black Mercedes-Benz coupe caused a crash involving as many as six cars near a gas station.

Asherey Ryan was riding in the car with her fiancé Reynold Lester at the time of the crash, and her toddler Alonzo was also inside the vehicle.

Ryan’s family says she was eight months pregnant, and she and her fiancé were on their way to a doctor’s appointment to check on the health of their unborn son, whom they planned to name Armani.

Sharita Randleston, Asherey’s mom and grandmother to the children, described her as a loving mother.

“We were so close. She was my first best friend,” Ryan’s sister, Shaseana Kerr, told NBC Los Angeles.

Kerr said she rushed to the scene immediately after seeing the news reports of the crash, which happened at the busy intersection of S La Brea Ave & Slauson Ave in Windsor Hills. “And when I got there, I felt destruction. I felt just evil. And I knew it was my sister,” she said.

“The first thought that came to my head was that it can’t be, it can’t be, because my daughter her doctor’s appointment was at 2:30, but it was really at 2 o’clock so they left at 1:30,” Ryan’s mother said.

“And then when my daughter Cody sent me a picture, I identified my daughter’s body right then. I knew what she was wearing, and I knew my daughter’s birthmark on the back on the right side, so no one had to tell me that it was her.”

Alonzo’s father Luis Fernando Quintero wrote on Facebook: “I don’t have any words rn [right now] I’m too much in pain because this is something I never expected no one did I’m going to miss you both and I didn’t get to say goodbye or make up for time lost with you Alonzo my heart is aching may y’all rest in [peace] god has gained two amazing angels.”

2The car Ryan was riding in split in half immediately upon impact, killing everyone inside, and she and Baby Alonzo were ejected from the vehicle.

Asherey Ryan and her unborn son were pronounced dead at the scene along with her 11-month-old son Alonzo Luchiano Quintero, whose first birthday would have been next month.

Ryan’s fiancée Reynald Lester, who was the father of her unborn son Armani, was also killed in the crash after their car split in half immediately on impact, sources close to the family confirmed.

Veronica Esquival, who witnessed the crash firsthand, said she was pumping gas just feet away when suddenly she saw debris flying through the air following the fiery collision.

“I was about to pump gas and all of a sudden, I hear all of the noises from all of the collisions, and then the fire explosion and I saw things, metal and things flying in the air. So, I just covered myself behind the pump,” Esquival told KTLA.

“All of the sudden, a baby literally flew from the middle of the intersection to the middle of the gas station and landed right on the floor in front of me. One of the workers came and saw me with the baby and took the baby out of my hands. Somebody tried to resuscitate the baby, but the baby was gone.”

Another heartbroken witness, Alphonso Word, who was just a few cars away from the intersection when the crash happened, said it sounded “like a bomb.” He said the child was “ejected from the street” along with the pregnant mother, who “landed over to the side.”

Word added: “Like I say, it’s the kids. That’s what touched me more than anything, the children, the ones that didn’t get a chance. The mother that probably was happy that she’s having a baby. It hurts. It does … Because I have a grandson. I know people that have kids. For a mother to be pregnant … that child never had a chance.”

3Nicole Lorraine Linton, the driver of the vehicle that crashed into Asherey Ryan and her family, was arrested in the hospital and will be formally charged, police said.

Nicole L. Linton, 37, a registered nurse from Texas who works in Los Angeles, was taken into police custody Friday (Aug. 5) at Ronald Reagan UCLA Medical Center in Westwood, where she is recovering after suffering “major injuries” as a result of the deadly crash she caused allegedly while driving drunk.

The California Highway Patrol said Linton will be formally charged Monday (Aug. 8) and could face charges of manslaughter with gross negligence.

“She needs to pay for her actions and the justice system needs to see that everything is done to make sure, uphold everything and be accountable for everything,” Asherey Ryan’s mother Sharita Randleston said of Linton.

Randleston lived with all of the family members who died in the crash and said that she can’t go back home.

“I’m so hurt I don’t know what to do,” she said. “That woman took three, four lives from me that I can never get back. Nothing can ever bring my babies back. Nothing.”

Tabia Johnson, a witness to the crash, photographed Linton sitting on a nearby sidewalk after the crash the crash with the burning wreckage visible in the background.

Linton appeared to have only sustained minor injuries, including bleeding near her head, according to Johnson, who condemned the woman’s driving.

Another woman who claimed to be Linton’s friend told reporters Linton was “drunk” and “fighting with her boyfriend” before she got into her car and caused the crash that claimed six lives and left at least eight others severely injured. Of those injured, six were teens with one suffering major injuries, according to reports.

Officials confirmed Linton was alone in the car. “She was drinking and she was not aware that it was a red light because she shot straight through,” Linton’s unidentified friend told KTLA.

Surveillance footage showed Linton’s black Mercedes speeding through an intersection, hitting at least two vehicles that caught fire and were sent hurtling onto a sidewalk before coming to rest against the corner sign of a gas station. A streak of fire led to one car, while another was split in half.

“It looked like the whole intersection from corner to corner was on fire,” said witness Harper Washington. “A lot of sparks and electricity. I was under the impression that, really at first I thought they dropped a bomb on us. I thought another world war had started. Then I realized it was a car into the sign.”

“Once the fire went away and the booming left, I realized it was two cars there. You could see the people on fire and that’s just sad. I really pray for the people and the community.”

4Asherey Ryan’s family has started a GoFundMe to help with funeral expenses.

A GoFundMe started by Asherey Ryan’s family to help with funeral expenses has exceeded its $100,000 goal from over 2,000 donors (as of the time this article was published).

The message on the page reads:

“On August 4,2022 the worst thing occurred. We lost Asherey Ryan her 11 month old son Alonzo Quintero, Asherey’s unborn baby Armani to a tragic car accident that took place on Slauson and La Brea. We need help with funeral expenses because they did not have insurance so any donations help. Please let the family mourn in peace.”