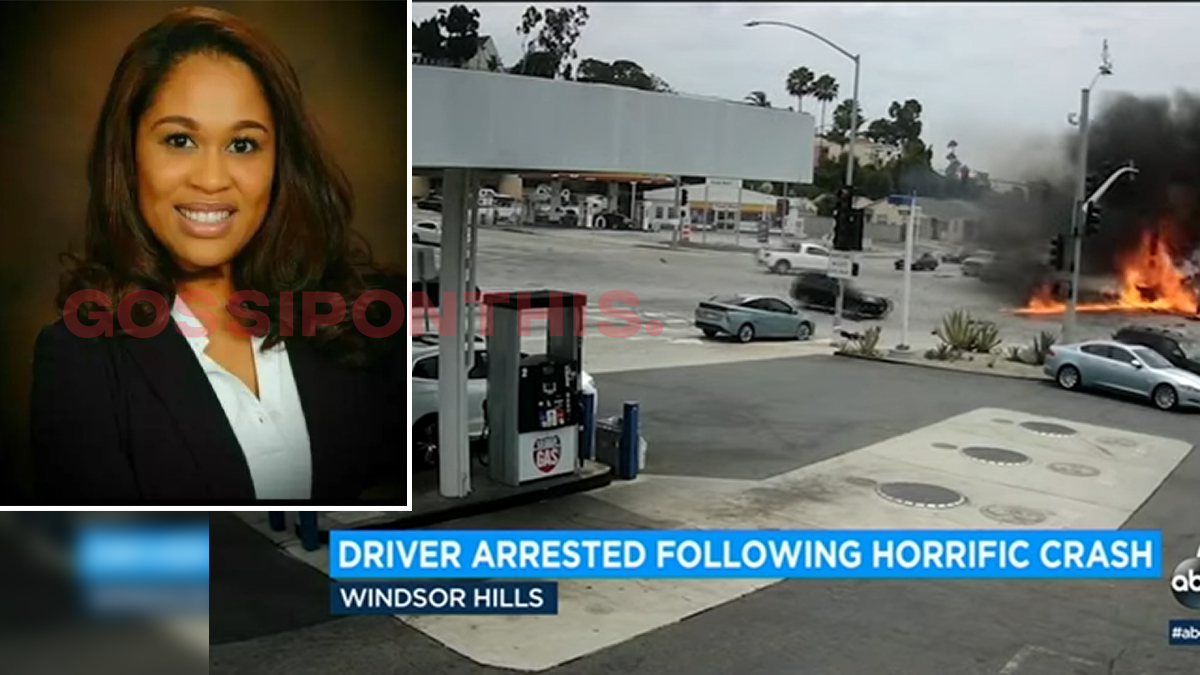 The reckless driver who caused the fiery L.A. crash that killed six people including a pregnant woman and a toddler has been arrested.

KABC reported that 37-year-old Nicole Lorraine Linton—a registered nurse from Texas—was taken into custody at Ronald Reagan UCLA Medical Center in Westwood on Friday (Aug. 5), just one day after the car she was driving crashed into several vehicles at a busy intersection in Windsor Hills and ignited a massive fire that instantly claimed the lives of innocent people.

Charges of vehicular manslaughter with gross negligence will be recommended when the case is presented to the Los Angeles County district attorney’s office, the Highway Patrol said.

Earlier Friday morning, authorities identified a pregnant woman and her unborn child as two of the six victims who were killed in the collision.

The coroner’s office did not immediately release the names of the other four deceased victims, but described them as a boy, whose age was not specified, two women and a man.

The young child who died was Asherey Ryan’s son Alonzo, her sister said Friday in an interview with Eyewitness News.

“I drove to the scene,” Ryan’s sister said. “I ran past the police officers just because I wanted to feel her energy one more time.

“Yesterday, I truly lost it,” she said. “My family was broken yesterday. And we’re still broken.”

Shortly after 1:30 p.m. Thursday, a Mercedes-Benz coupe caused a crash involving as many as six cars near a gas station, according to the California Highway Patrol.

Several people were ejected from the cars and two vehicles caught fire. News video from the scene showed the charred and mangled cars, as well as a child’s car seat among the debris covering the street.

Surveillance showed the Mercedes careening through an intersection, striking at least two cars that exploded in flames and were sent hurtling onto a sidewalk, winding up against the gas station’s corner sign. A fiery streak led to one car. One vehicle was sheared in half.

“It looked like the whole intersection from corner to corner was on fire,” said witness Harper Washington. “A lot of sparks and electricity. I was under the impression that, really at first I thought they dropped a bomb on us. I thought another world war had started. Then I realized it was a car into the sign.”

“Once the fire went away and the booming left, I realized it was two cars there. You could see the people on fire and that’s just sad. I really pray for the people and the community.”

Seven injured people were taken to the hospital, including the woman who was driving the Mercedes. Her injuries were described as non-life-threatening.

The other victims had minor injuries and included a 33-year-old woman and six children ranging in age from 13 months old to 15 years old, CHP Officer Franco Pepi said.

Witness Alphonso Word choked up as he described seeing the pregnant woman and a child in the immediate aftermath of the crash.

“It hurts. It does,” Word said. “Because I have a grandson. I know people that have kids. For a mother to be pregnant … that child never had a chance.”