GOSSIPONTHIS.COM Crime Man Shot & Killed Postal Worker When She Refused to Deliver His... 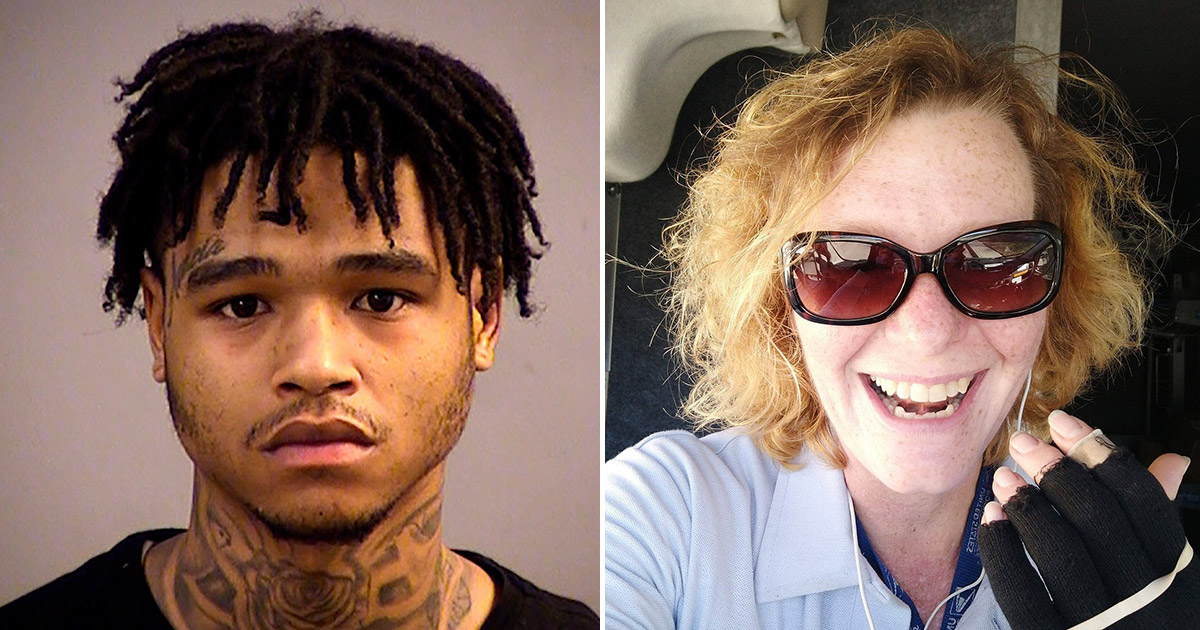 An Indiana man is facing serious charges after he allegedly shot and killed a postal worker who refused to deliver his mail because of his “aggressive” pet chihuahua.

Cushingberry-Mays is accused of shooting Summers, 45, as she delivered mail Monday afternoon near his home on North Denny Street in Indianapolis, Indystar.com reported.

19-year-old Alondra Salazar was asleep in her home on North Denny Street when she awoke to a loud bang at her door.

She said she looked through her peephole and didn’t see anything, but when she opened the door, she found Summers slumped on the porch suffering from a gunshot wound.

Salazar said there was blood and undelivered mail beside Summers, along with a small bottle of hand sanitizer and a can of pepper spray. She said she held Summers’ hand and comforted her until paramedics arrived.

“She couldn’t speak, she was hyperventilating,” Salazar said of Summers. “I think she said something about her kid and that’s when I started crying.”

Summers, a mother-of-one who’d just joined the U.S. Postal Service in 2018, was rushed to Eskenazi Hospital in critical condition and was pronounced dead about an hour-and-a-half later. The coroner classified her death as a homicide.

After Cushingberry-Mays’ arrest, he told police that he saw Summers walk past his house Monday afternoon (Apr. 27).

Mail delivery to the man’s home had been temporarily suspended due to an ongoing issue with an “aggressive” dog at the residence, court documents stated.

Cushingberry-Mays said he followed Summers as she continued her route and repeatedly asked her for his home’s mail, but the woman ignored him.

The man said he was standing on the porch steps of his home about six feet away from Summers when she turned and pepper-sprayed him.

Cushingberry-Mays told investigators he immediately pulled a gun from his waistband and fired a single shot at Summers. According to the affidavit, the man “acknowledged the mace was not deadly, but led to discomfort from his asthma.”

Cushingberry-Mays then dropped the gun and fled to his aunt’s house, the criminal complaint states.

Paul Toms—president of the Indianapolis branch of the National Association of Letter Carriers—and another person who witnessed the shooting told WTHR 13 News that the confrontation between Cushingberry-Mays and Summers happened because Cushingberry-Mays was upset about not getting his COVID-19 stimulus check.

Summers, however, couldn’t deliver his mail because of the ongoing issues with a dog at his residence.

Prosecutors said the USPS Linwood Indianapolis Post Office sent a letter to the residence on April 13th saying they would have to pick up their mail from the post office until the issues with their dog were resolved.

Toms said that, in compliance with USPS guidelines, Summers had reported an issue with a dog at the home, and after three warning letters were sent, mail delivery to the home was stopped for about two weeks and “wasn’t even given to Angela that day of the incident.”

Toms added: “She was just following protocol and the Postal Service curtailed the mail. It was not her fault that she didn’t have the mail that day. My understanding is that she tried to explain that the mail could be picked up at another location and an argument ensued. I heard she was called horrible, horrible names.”

Two days before the fatal shooting, Summers wrote a lengthy post on Facebook complaining about a Chihuahua barking at her. “This dog is a nasty devil that I’ve actually had to spray—twice!” she said.

Summers also wrote that the family threatened her with violence when the post office stopped delivering their mail due to the dog complains and said that she felt “seriously unsafe” after the threats.

“So there’s this house with a chichi. The dog is a nasty devil that I’ve actually had to spray – twice!

“Three times they’ve gotten a dog warning card in their mail box with their address on it. [That’s] more generous than I usually am to most problem owners. Still the dog is allowed to run loose.

“A month ago, the last time the dog was loose and wouldn’t stop coming after me, they stopped receiving mail. Now stimulus checks are going out. Guess who did not get one yesterday.

“When I got to the street and saw the check for the current person, I pulled it to go with the rest of the ‘dog letter’ mail (they have to sign a dog letter before they can get their mail or re-establish delivery).

“After I pass this street, I get a call asking if this house got a stimulus check today. Well, no, I respond, all of their mail is on hold until they sign a dog letter. There was a check for them but they get nothing until they sign that latter. What about DW, I am asked. Well, he got a check too, but I put it in to be forwarded, I respond.

“So this morning DW and his lady mouthpiece are on the phone – again – calling to ask about that check. Where is it going? When was it sent there? Can’t they just pick it up at the post office? (Why the stock answer is not, “sure you can pick it up at the post office once you rent a PO box” is beyond me, but you know 15 years in sales doesn’t just turn off because you said so!)

“Anyway, [these] are utterly ridiculous questions and at this point I’m done with the whole mess. They’ve already involved a clerk, two carriers, and a supervisor and I’ve had to REPEAT myself five times in less than 24 hours. I am over these lunatics.

“Today I’m walking past said house and loads of people are on the porch…I mean LOADS. There are a half dozen kids running around too. And the chichi. The chichi starts backing and I move to the sidewalk to pass the house.

“A woman stands up and hollers for my attention. She tells me that she’s the ‘lady of this house’ and that if I EVER mace her dog again she’ll personally mace me. (Yup, that was definitely a threat to a federal employee *note*)

“Then she proceeds to yell ‘bitch this and kick your a** bitch that’ at me. I keep walking. I get to the other side of this house’s yard and am putting mail in the [box] at the next house and she’s yelling that if I talk to these kids again she’s going to set a pit bull loose on my bitch ass (two clear threats now, I’m beginning to feel seriously unsafe, how exactly does race factor in this, is she threatening to commit a hate crime against a federal employee?)

“I turn to go to the next house (yup, quite literally turning my back on that sh**show) and she finished up with ‘And you BETTER deliver my mail, bitch!’ (Is she really serious? Like I’m gonna set one single foot on that porch between now and when hell freezes over after being verbally assaulted and threatened with physical harm and a hate crime…)

“I spoke not one single word. Not one. Oh, most assuredly she was showing her a** for her friends and family. Oh, most assuredly there’s a form I can fill out about that too. I do not know what it is, but man these people either love me to death or hate me with a driven passion.” 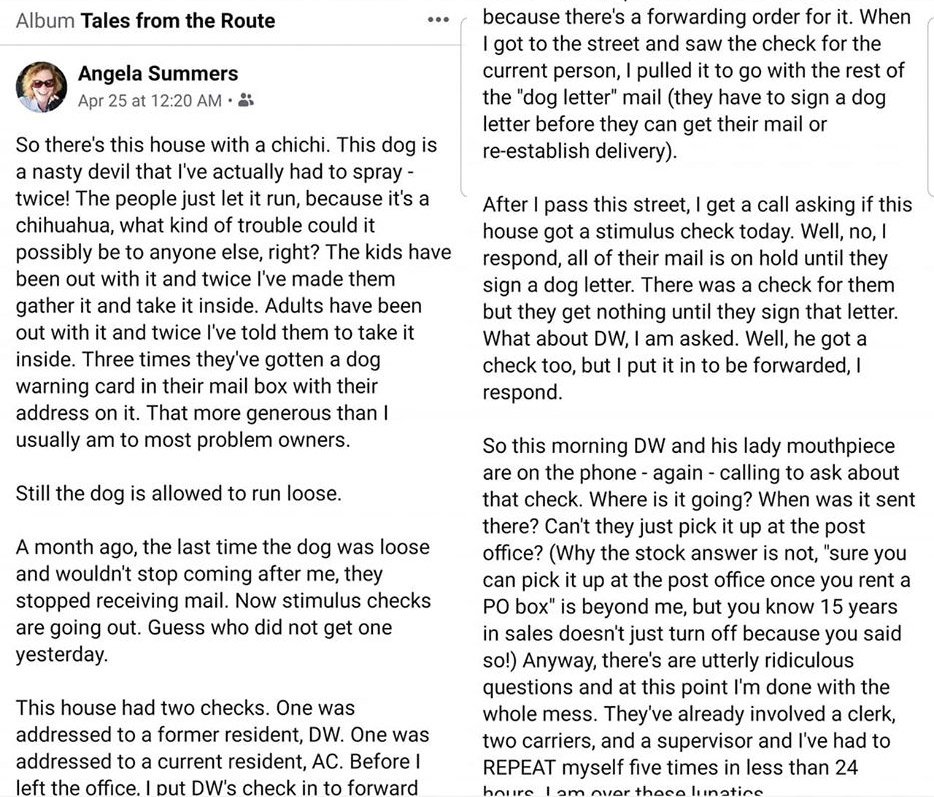 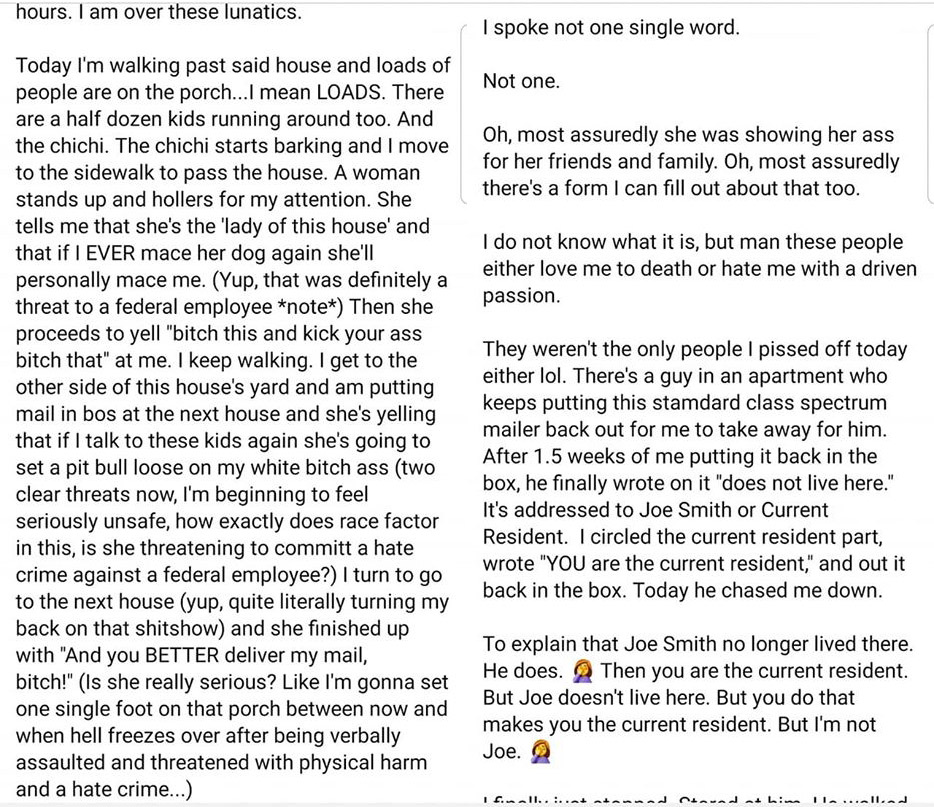 Immediately after the shooting, the U.S. Postal Inspection Service launched an investigation and offered a $50,000 reward for any information leading to an arrest.

Tony Cushingberry-Mays was taken into police custody on Wednesday, though it wasn’t clear if the arrest was made due to information obtained through the reward.

“U.S. Postal Inspectors are charged with ensuring the safety and security of USPS employees, and that is a charge that we do not take lightly,” Felicia George, USPI Detroit Division Acting Inspector in Charge, said in a statement.

“Anyone who threatens, assaults, or otherwise harms a postal employee fulfilling her critical mission will be apprehended and held fully accountable.”

Cushingberry-Mays is facing a number of federal charges, including (1) murder in the second degree, (2) assaulting, resisting or impeding certain officers or employees, and (3) discharging a firearm during and in relation to a crime of violence.

The man said he’d never spoken to Summers before April 27th. He admitted to the shooting, but told investigators he “did not mean to kill the letter carrier, but wanted to scare her.”

According to federal law, killing a federal employee while on duty can be punishable by death or life in prison.

“Angela was such a joy to be around, she was such a breath of fresh air. This is the worst thing that’s happened in my career,” Paul Toms, president of the Indianapolis branch of the National Association of Letter Carriers, told The Daily Beast.

“This is a federal crime but more importantly this is a senseless crime that should have never happened. It breaks my heart.”

A GoFundMe has been established to help with Summers’ funeral expenses.