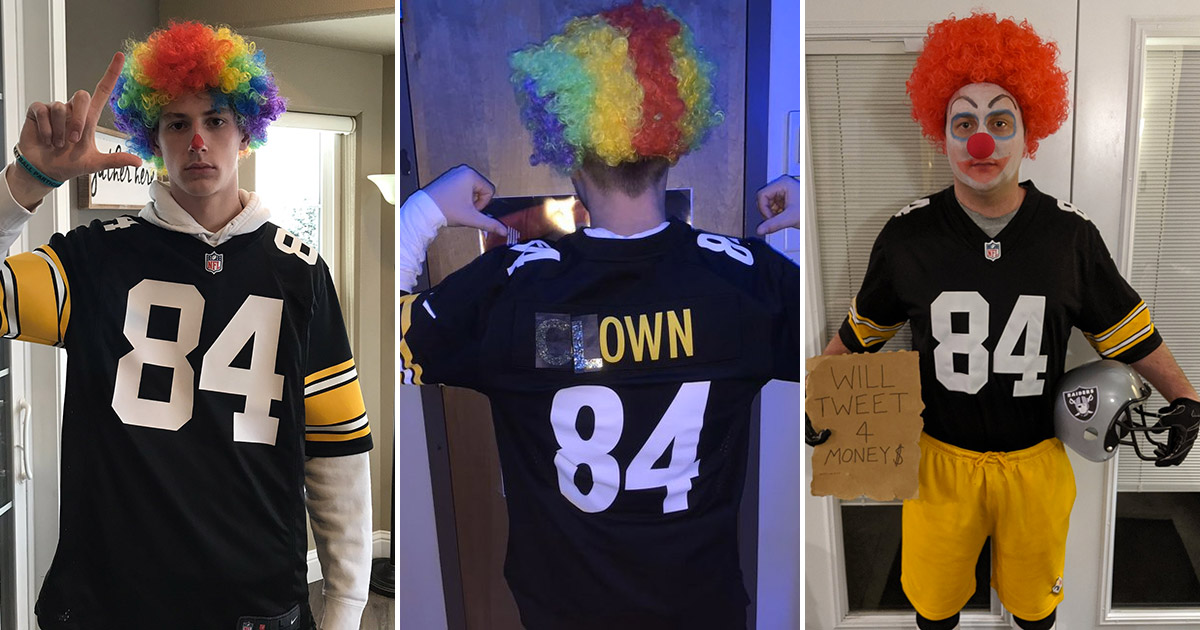 Halloween nowadays brings a bevy of social media content as people show off their over-the-top costumes in an effort to go viral.  This year, Antonio Brown’s NFL exploits and unemployment was a popular costume choice for many.

However, some fans chose to go beyond just impersonating Antonio Brown and referred to the Pro bowl receiver as “Antonio Clown.”

The costume could be considered creative as the receiver is jobless and has legal issues pending, but a majority of fans chose to go with the clown moniker.

The unsettling aspect is that most of these fans are predominantly white and seem to harbor vitriol towards Brown. The issue is the vast majority of the costumes lack in creativity and demean Antonio Brown without an attempt at tying back to his NFL antics much if at all.

There’s just something hella uneasy about a bunch of bitter white folks looking to demean a black multi-millionaire because he didn’t just shut his mouth and catch the ball.

Kids are dressing up as Antonio Clown for Halloween! ?? #Steelers https://t.co/Bvje6YFL2d pic.twitter.com/hdrg5OCt43

.@AB84 the hair is almost as good as yours pic.twitter.com/r624fdOEPg

#AntonioClown kids get extra candy at my house this year pic.twitter.com/MXh2HJJOjC

Ladies and gentleman of the Twitterverse I present to u: Antonio Clown pic.twitter.com/Q5x3TErAhc

Many will argue Brown brought this upon himself with his actions, but does it really make him a clown for wanting to leave the Pittsburgh Steelers and subsequently the Raiders? We can all probably relate to not feeling like a work environment was right for us and wanting to move in a new direction.

Patriots owner Robert Kraft has his own scandal, yet allegations against Brown led to his release from the Patriots.

This narrative does not help a post-Colin Kaepernick NFL at all in which the big wigs operate as plantation owners and any player that dares to speak up and have an opinion will be punished and ostracized.

Antonio Brown certainly could have acted differently in many instances and he has to deal with that as he can no longer find a team to play for.  On the other hand, the toxicity of racially charged NFL fans rears its ugly head yet again.

Adam Thielen calls out Kirk Cousins and the narrative is not him being a diva. Andrew Luck chooses to retire after training camp and gets paid his guaranteed money.

Ask yourself if Antonio Brown on the Steelers (prior to Raiders saga) before all of this would receive the same treatment in either of those scenarios.  The answer is no. We all saw when he critiqued Ben Roethlisberger and how that quickly manifested.

Brown caught wind of his mockers and seemed to take it in stride on Twitter, playfully jabbing at fans who dressed as him.

Miss me huh champ go get you some candy https://t.co/WZRXHQA40i

Your skully on wrong https://t.co/0R4UVIePNV

Nice condolence but holloween over https://t.co/DKRtrOhCBm

No matter how you feel about Antonio Brown it is clear there is a negative attitude that many fans take towards Black players in the NFL who are outspoken, whether it’s for a good cause like Kaepernick or more selfish personal gain like Antonio Brown.

Both are met with hatred and no attempt of understanding.  Hopefully, the fan base can grow to the point of respecting and understanding the men under these helmets.