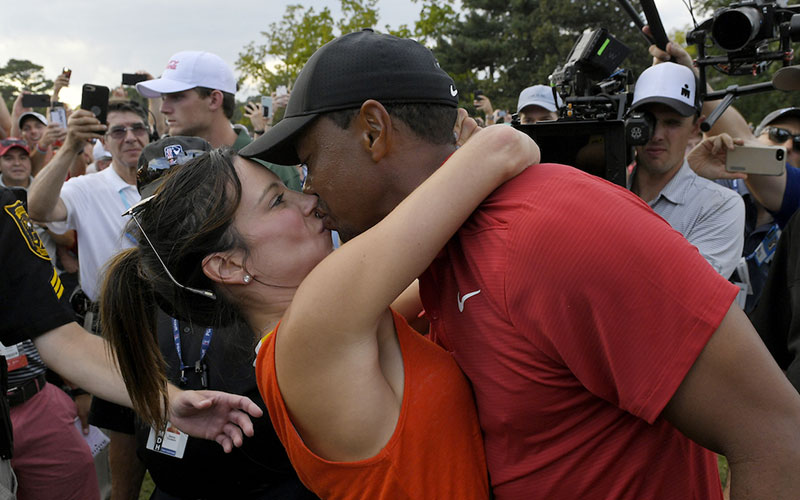 Tiger Woods captured the Tour Champion title on Sunday (Sep. 23), marking his first win in five years, and he celebrated the momentous occasion with a PDA moment with his girlfriend Erica Herman.

After giving an emotional post-match interview, Woods met up with Herman, who looked very happy to congratulate her beau, who was sporting a huge smile across his face. Herman flung her arms around Woods’ neck and the two shared a lengthy brace and told each other “I love you.” After pulling away from one another, they kissed.

You can watch Woods and Hermans’ emotional moment below:

Not only a big W for tiger but a big L “love you” for Erica! pic.twitter.com/jx7OU06GAS

“It’s been tough,” Woods said after the event. “I’ve had a not-so-easy last couple of years and I’ve worked my way back and … it’s just hard to believe I’ve won the Tour Championship.”

His comeback has been several years in the making after his career took a downward spiral following a cheating scandal and ugly breakup with ex-wife Elin Nordegren. He later joined a 45-day therapy program.

“I thought I could get away with whatever I wanted to do,” Woods said in 2010. “I felt that I had worked hard my entire life and deserved to enjoy all the temptations around me. I felt I was entitled.”

Woods dated Olympic skier Lindsey Vonn for over two years after the two met in 2012 at a charity event.

The pro golfer was arrested for driving under the influence last year after authorities found him asleep at the wheel not too far from his home in Jupiter Island, Florida.

Following his May 2017 arrest, in which he told officers he had a bad reaction to prescription drugs, Woods said in July that he had sought treatment to deal with issues regarding his medication.

Woods, 42, and Herman, 33, have been dating for more than a year. They have been spotted on various dates together, grabbing sushi in California and even hitting up a baseball game. The couple took their relationship public—officially—when they attended the Presidents Cup together last fall, where Herman was spotted wearing a “Player Spouse” badge.

Herman has since accompanied Woods to many other events, and the two have been spotted out on numerous occasions, like back in December 2017 when Herman was seen with Woods’ two children at the Hero World Challenge in the Bahamas. The paparazzi have also caught them on various dates in California and in Florida.

This year, Herman, who met Woods through work (she was the general manager of his Jupiter, Florida restaurant The Woods), has been spotted cheering for her man from the gallery at various courses. According to TMZ, Herman no longer works at Woods’ restaurant.

Regarding the seriousness of their relationship, a source previously told People that Woods doesn’t plan on getting married again after his split from Nordegren in 2009.

“No one has signed any paperwork,” People’s insider said. “It’s not like they’re pledging their lives to each other. But she’s really nice and Tiger likes her. Tiger doesn’t like to be alone… But he doesn’t like to settle. Not anymore. So when he’s with someone, he really needs to be into her.”